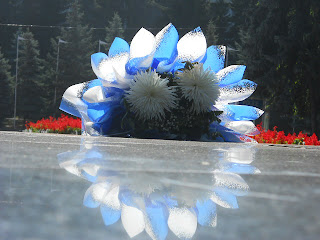 This past weekend, my last weekend in Almaty and in Kazakhstan, I went on a mission to find out more about how to make laza. I thought that my best bet would be the Green Bazaar, where I hoped to find a babushka who might be willing to divulge her secrets. It also gave me a good excuse to explore my two favorite places, Panfilov Park and the Green Bazaar, one last time. After walking around Panfilov park, and having to avoid the street cleaning tractor deployed there, I headed to the bazaar and down to the fruit, vegetable and spice vendors, where I honed in on a spice selling babushka.

I spent a few minutes looking at her wares as she arranged packets of spices. Most of her other spices were in little canvas bags and were overflowing and there were four different types of peppers. Once she returned to her side of the stall, I began to describe what I had come for. First, I had to describe laza, because laza is the Kyrgyz name not the Kazakh name. This involved me talking about this spicy red sauce made with pepper and garlic; however, it was only when I mentioned that it was served with lagman did she know what I meant. She called the sauce lagzhan. She then proceeded to tell me that she had just sold out of her lagzhan and that the vendor would bring more during the week. While I would have happily bought lagzhan had she had it, I was more interested in what type of pepper I should use to make it at home and so I asked. She was more than happy to show me. First she asked me about my tolerance for hot foods before pointing out two different types of red pepper. Since I am not an expert, I will attempt to describe them. One was a very fine powder, red as Georgia clay, the other was composed of dry pepper flakes, the size of pepper seeds. She sold me a cup of each to take home. Then, without prompting, she began to describe how to make lagzhan. First, she said that I would need to moisten it with some water. I gathered from her hand motions that she thought that I should do this with a blender. She then went one to tell me that I had to use two crushed cloves of garlic. She was very insistent on this point, emphasizing “two cloves, not one, two cloves” of garlic several times. She then said that I had to use oil and fry it, though she didn’t specify which to use. I will probably use sunflower seed oil as Acel suggested. My hunch paid off, within twenty minutes I had a recipe for lagzhan, two cups of pepper and the babushka had a story about the strange American girl who wanted to know how to make laza/lagzhan.
I walked around the bazaar a bit more before breaking down and buying two books; a collection of Jack London short stories, which are very popular here, and In the First Circle, by Solzhenitsyn. I feel it is only fair, since they are the only souvenirs that I have bought for myself on this trip.

On Sunday morning, I decided to walk down Seifullin to Al’-Farabi  Ave., the big highway that runs on through southern Almaty and connects it to the airport. I had a meeting scheduled for Tuesday and I wanted to make sure I knew where the building was. I headed down Seifullin early in the morning, but instead of running straight in to Al’-Farabi, as I thought I would, I was forced, by way of a highway with no way to cross, to turn right. I could see what I thought was the building, so I headed in that direction. I went up a few streets and right a few streets until I hit Al’ Farabi. 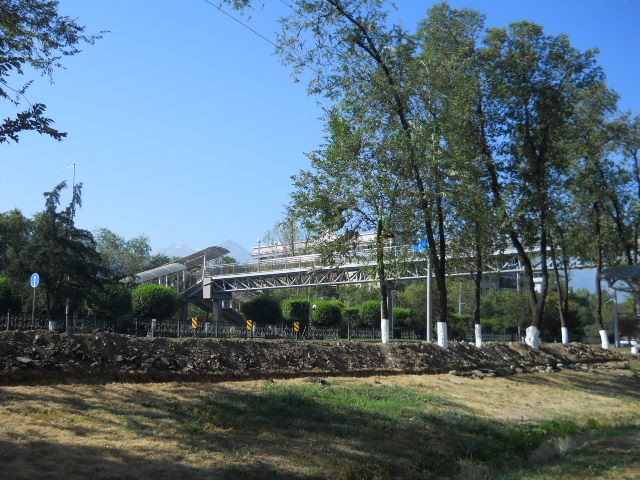 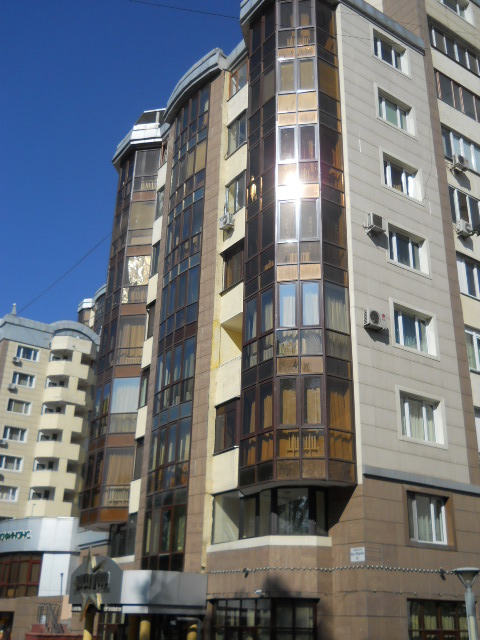 Al'Farabi is the avenue where Almaty meets New York. This is where all the big businesses have their headquarters in entirely glass buildings. It is on Al’ Farabi that big names like Louis Vuitton and Prada do, or will, have their regional headquarters. I continued west on Al’-Farabi, which in some areas in six lanes wide, until I hit a familiar sight, the concrete canal, which runs alongside the amusement park on Abai. Just on the other side of that was the tall glass building where my meeting was scheduled for Tuesday. 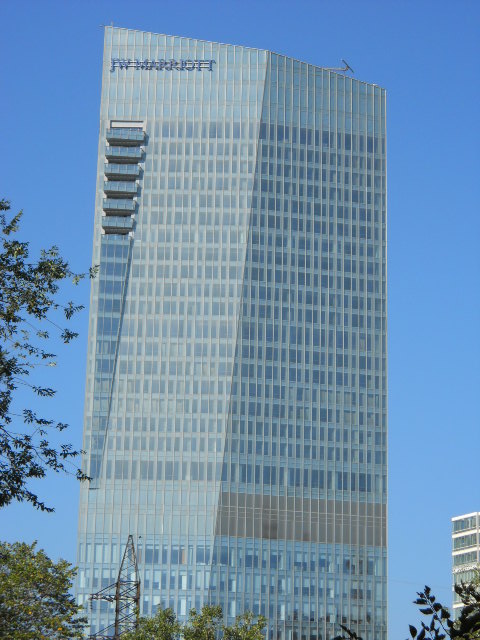 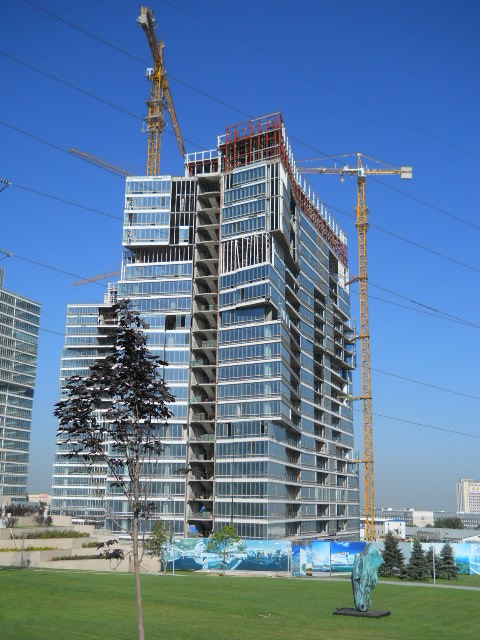 I walked around the canal a bit and discovered that on the southern side of Al’-Farabi there is a small berm and on the other side of that is the river that is funneled into the concrete canal. It was odd looking south from the berm, I had Al’-Farabi at my back and a river valley in front of me with a dirt path that would lead you to the mountains. 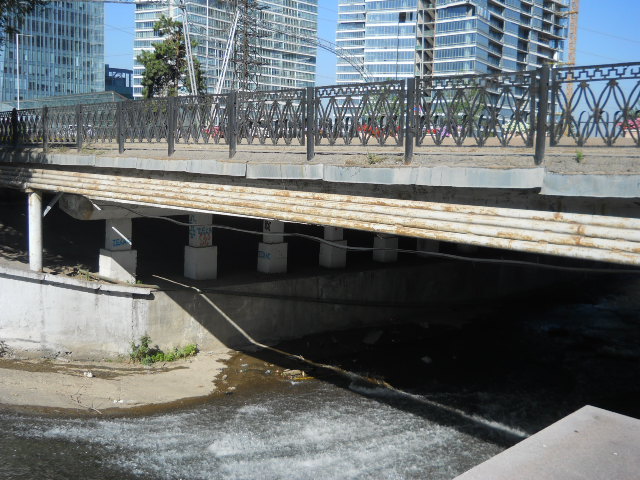 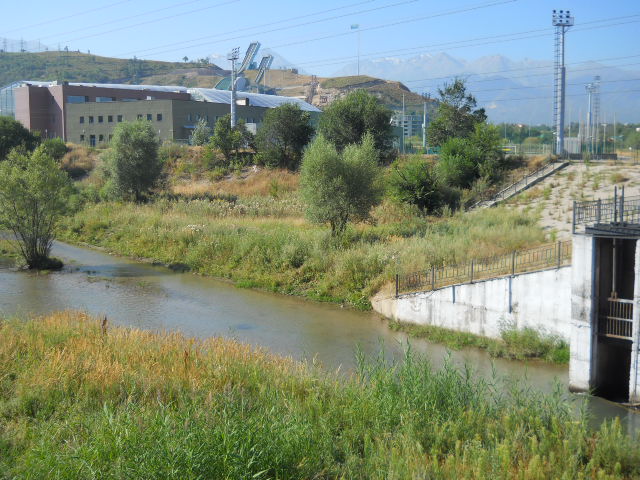 After a few minutes, I turned around and began to head back home, this time along the canal knowing that it would spit me out on Abai. While the canal itself is not beautiful, it is made up of concrete basins that spill over from one to another with brown water and hundreds of bottles floating along, the banks had some very nice parks. It was nice to see so many people out an about with their dogs. 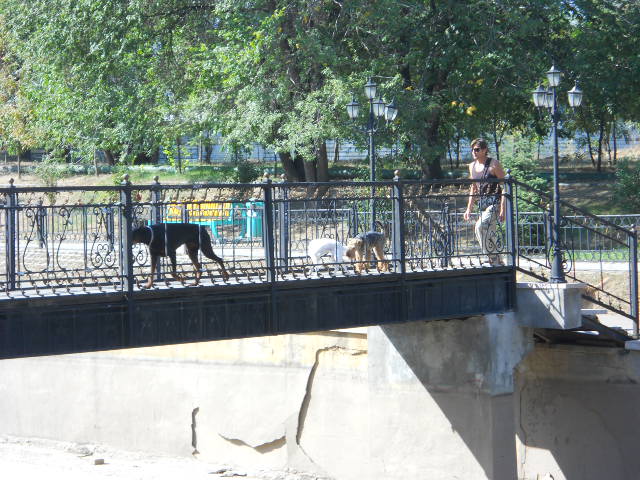 As I was walking along, an old Kazakh man in his seventies caught up with me. He was wearing the tubecheka, a traditional hat, and was carrying two bags, one with apples the others with apricots. He struck up a conversation, which we carried on as we walked towards Abai. He told me that he was walking from the mountains, where he had picked those fruits, a four-hour walk. He also said that he was from a village 100 km outside of Almaty and that he didn’t like the city, there were too many dogs.  We had a good and interesting discussion for about twenty minutes. When I left him at Abai, he called out “I wish you long life.”

Sunday afternoon I went with Jessica and a friend of hers to a the local art museum which was playing host to a collection of French Art.

Yesterday, in celebration of the end of my internship and Mariana's belated birthday, Mariana, Jessica and I went to Шоколадница, the only one in Almaty. I was thrilled to find it and even more thrilled to eat the Шоколадница blini, upper right, and drink the most amazing hot chocolate in the world, bottom right. A guilty pleasure? Most definitely.

I am thankful for the opportunities that this internship has granted  me. I have learned much, I have widened my skill set and I have gained experiences that will help me secure my future career. I am going to miss Almaty, the city, the people and the friends I have made.  Tomorrow, I leave for Thailand to spend time with one of my best friends, Lydia. However, this is not goodbye Kazakhstan, this is see you soon.