From Chiang Mai to Bangkok

We decided to stay in Chiang Mai through Sunday evening so that we could go to the night bazaar. We stayed in our hotel to the last possible moment before checking out. After check out, we walked around Chiang Mai and then found a café to people watch for a bit. The bazaar opened up at four and Lydia and I walked around the merchandise stalls. I ended up buying a bar of soap intricately carved into a flower and painted and a picture of a tiger and her cub painted in bright colors on a piece of black fabric. Once our wallets were considerably lighter (mine more than Lydia's), Lydia and I went to the food section of the market, where I bought yellow rice and chicken curry from an Indian woman. 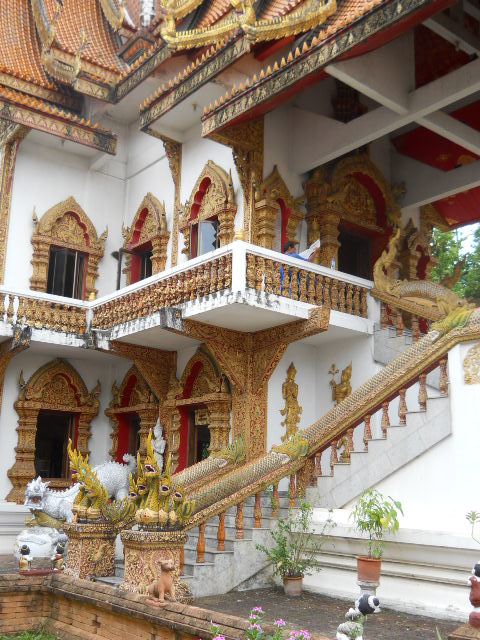 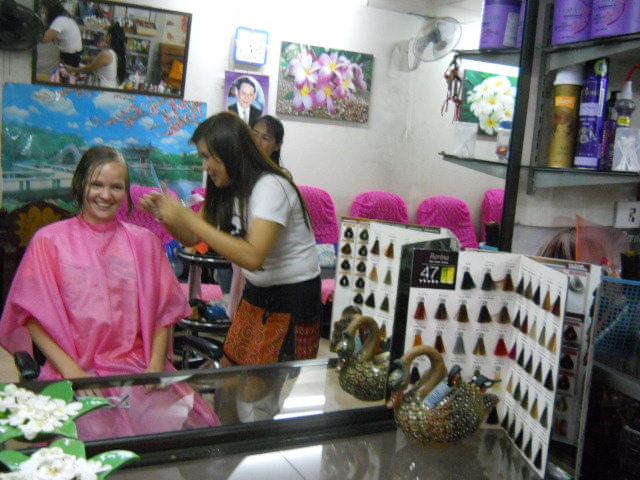 Our bus left at 9:15 p.m. After collecting our luggage from the hotel storeroom, we caught a taxi to the bus station. Unfortunately, he dropped us off at the wrong terminal, which led to a frantic rush across the bus terminals until we found the proper one. Once again, the bus was less comfortable than we had hoped. However, the seats did recline to a near horizontal position.
We arrived into Bangkok just after 6:00 a.m., an hour earlier than expected. Still dazed from lack of sleep, Lydia and I had to ward off swarming taxi drivers who acted as if they did not know the word “meter.” We found a taxi line but half a dozen or so taxi drivers, with cars that read “meter taxi,” refused to take us on the meter. Finally, one driver did and we got in. We ended up at the wrong hotel, which was entirely our fault because our hotel was off the map. Thankfully, the staff of the Royal Hotel were very kind and helpful and called us another taxi to drive us to the correct hotel. 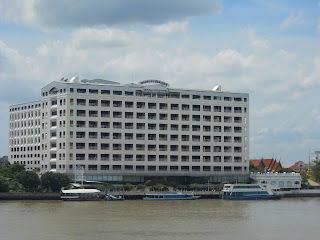 When we arrived at the Royal River Hotel and tried to check in, the girl at the front desk said that our reservation was incorrect and that we were scheduled in for Tuesday instead of Monday. Additionally, the only room that they could offer us for Monday was a room that cost twice as much as the room we had booked. Lydia called Bekah, who had made the reservation, and then handed the phone over to the manager. Bekah, who speaks Thai, made her displeasure well known and the manager quickly handed the phone back to Lydia and studiously avoided Lydia, the phone and the poor trainee for the rest of the conversation. Magically, after telling us that they didn’t have a studio room for Monday, they managed to find us one. The studio rooms at this hotel are the hotels secrets and cannot be booked on the internet, they are considerably cheaper than the other rooms because they are located down the center of the hall and don’t have a window.  We got into our room and promptly took a nap…for five hours. 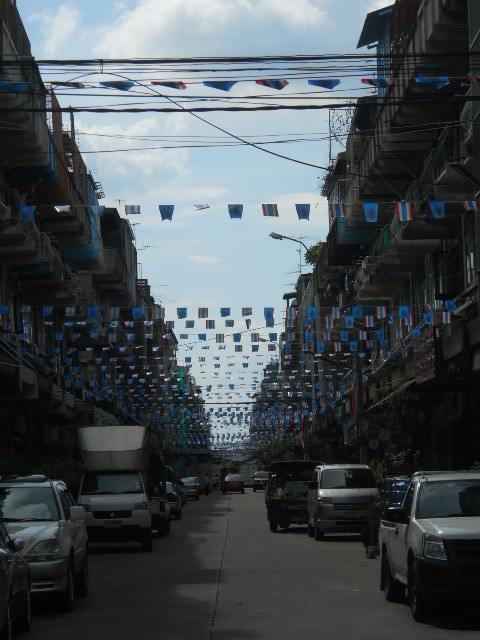 Today, after breakfast, we headed out to go see the Teak Palace. This residence once belonged to the King and Queen but was gifted to the Thai people; it is now a museum with photos and furnishings. We caught a tuk-tuk on the main road outside our hotel. While our driver seemed to have understood the word “palace”, he missed the word “teak” and ended up driving us to the Grand Palace. This would not have been so bad, except there is a dress code at the Grand Palace and we were not dressed to visit it. We wandered around aimlessly for a bit because we had no idea where he had dropped us off. Finally, we realized the mistake and headed in the direction of the Grand Palace. I wanted to get close to the entrance to see what they said about the dress clothes, but before we even made it on the side of the road with the palace, merchants harassing us about Lydia’s shorts trying to get her to buy a sarong to enter the palace. One even poked Lydia in the side before showing her a picture and pointing to his stall. We turned around and left the merchants to harass other tourists and found a tuk-tuk to take us to the Teak Palace.

This tuk-tuk driver drove us around the back alleys of Bangkok and through quaint streets, avoiding most of the traffic. When we arrived at the palace, he directed us to the entrance. Inside, Lydia let out some colorful language. The Teak Palace also required a certain dress code and Lydia resigned herself to buying a sarong. In addition to covered knees and shoulders, we were also required to walk the palace barefoot, though, by now, I am use to it.
Inside, the furnishings and décor gave the palace a very English feel. There were even two portraits of Queen Victoria in one of the rooms. Some of the rooms, such as the dining room, were very formal. Others, a TV room from the 1950s, were very informal and family like. We got into the palace at just the right time, as we were leaving school tours were beginning and at least a hundred kids were walking into the palace. 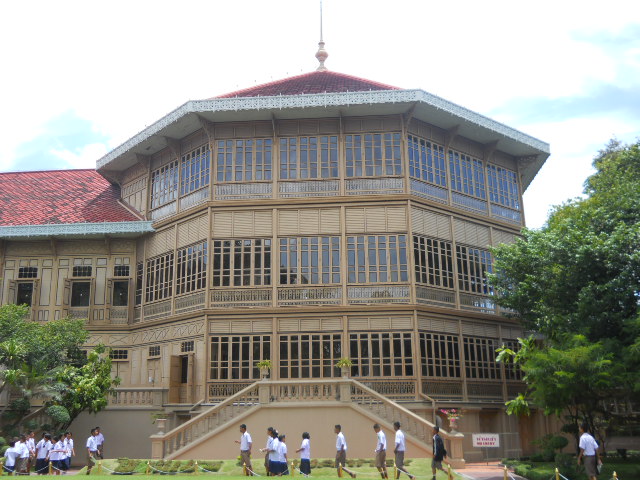 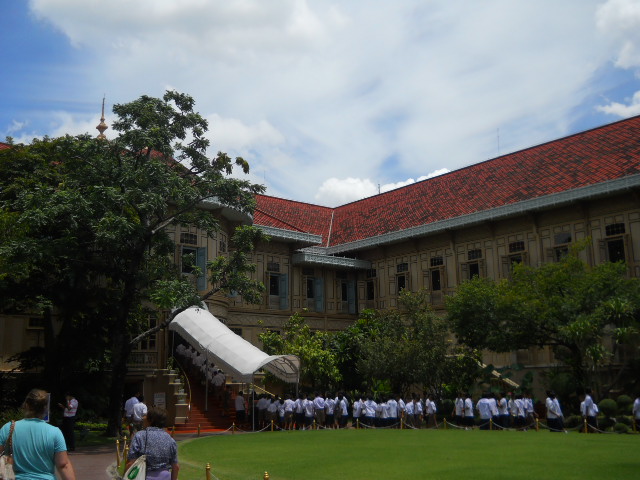 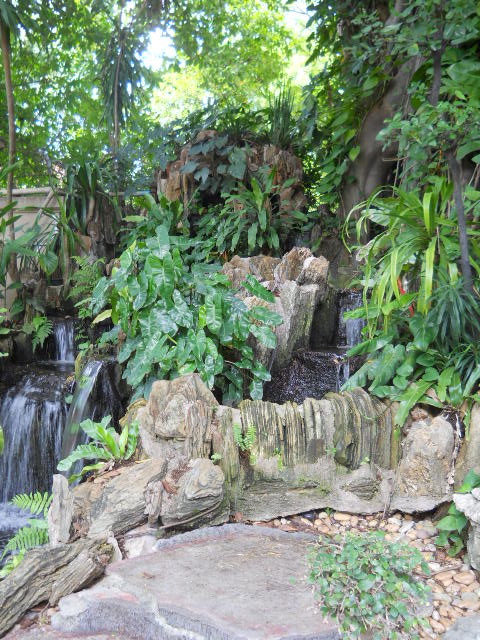 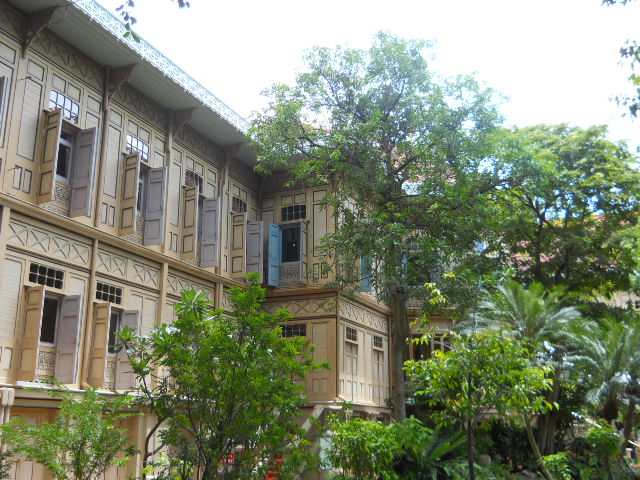 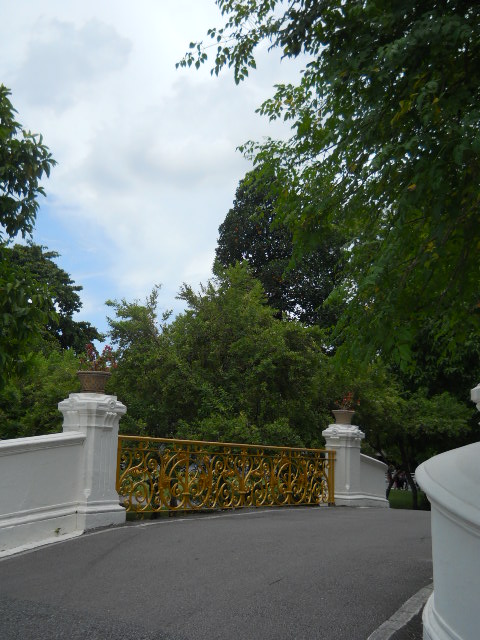