My flight from Kazakhstan to Thailand left at 8:30 a.m., which meant that I was up before the sun rose over Almaty. Thankfully, Timur drove me to the airport and I got there before check-in had even begun. I cleared migration and security quickly and waited in the international waiting area for an hour. The flight was six hours and they gave us two meals. I slept the majority of the flight, waking upon descent. Once we landed in Thailand, I cleared migration again and settled in with my nook and waited to Lydia to arrive.

Lydia was scheduled to arrive on the 9:10 p.m. plane, but those passengers came and went and she was not among them. I didn't think that I could have missed her, but I walked down to the "waiting area" anyways. Still no Lydia. So I went on to one of the Internet terminals and checked my Facebook, assuming that if she had been delayed she would have messaged me. No message. I checked my Gmail. No message. Now I was getting nervous, I did not have any contact information for Lydia's parents or acquaintances in Bangkok. I went up to the information desk and asked if they could check the passenger manifest to see if Lydia had even made the plane, but they could not understand my meaning and told me just to wait at the international gate. I went back over and I waited for the next flight from Seoul and still no Lydia. I logged back on to one of the computer terminals and decided to check her Facebook to see if she had made any references to being delayed. That's when I found the message from her mom on her Facebook page addressed to me. Lydia had been delayed out of Atlanta and was expected on the 11:45 p.m. flight. That flight was in turn delayed until 12:23 a.m. Finally, some time after 12:30 a.m. an exhausted Lydia made her appearance.
We headed down to the waiting area where Araan, a family friend, was waiting for us. He'd apparently been there since 8 p.m. but had not recognize me from the pictures that Lydia's family had sent him even though we must have passed while I was looking for her.
Lydia's delay meant that we could not make the night bus that we had be scheduled to take and ended up booking a hotel for the rest of the night. It was pretty seedy.
Four hours later, Lydia and I were again awake and we met up with Araan who took us to the bus station. I tried to get money out of the ATM but my credit union decided that I could not withdraw money even though the told me before I left that there should not be a problem. They blame Visa, I call BS because, eventually, I was able to withdraw money using my Bank of America card, also a Visa. We bought the tickets and went to the cafeteria for some food. To buy food, you purchase tokens/tickets and purchase your food before returning the remainder to receive change.
The bus that we took was very nice, more comfortable than any plane that I have flown on. The one exception was the toilet, which was less than sanitary. We were seated on the second floor of the bus at the very front, which meant we had a direct view out the windows as we drove for six hours. The seats were wide with foot rests and I slept for most of the trip, waking just before we arrived in Khon Kaen.

Khon Kaen is the current residence of Lydia's parents, the wonderful Mr. and Mrs. Douglass, and her sister, Bekah. Bekah moved to Thailand several years ago as part of the Peace Corp. When she completed her tenure, she chose to remain and a couple years ago her parents joined her, they now teach English at an elementary school in town. We are staying at their house, which is on the outskirts of the city. Our first stop in Khon Kaen was the Green Market. The Green Market is a new, fun, hip market. There is an abundent variety of food, clothing and live music. We went there for dinner, which included grilled meat on sticks and sticky rice. 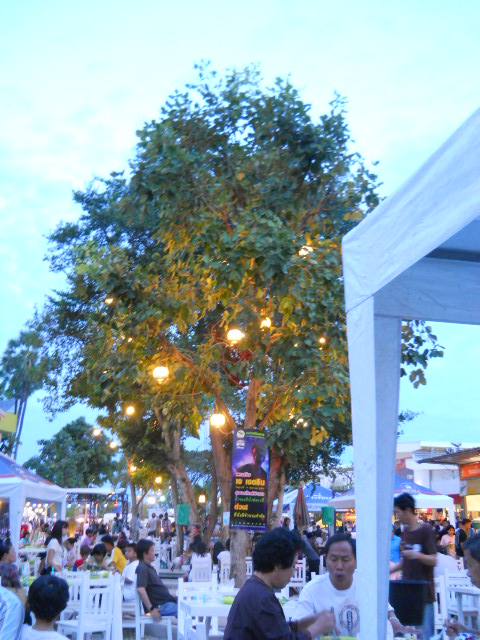 Sunday was the Thai Mother's Day, as well as the Queen's Birthday. We went out to lunch to celebrate with Mrs. Douglass before exploring Central, which is one of the larger shopping complexes. Afterwards, we dropped Mrs. Douglass back at home, so that she could enjoy her new kindle, while we went to one of the wats. The wat, which is located outside of the city, sits on the shore of a large lake. To get to the top, you can either climb the thousand steps, or you can drive. We drove. The most prominent feature of this wat is the large seated white Buddha. While walking around the wat in bare feet, I managed to do a magnificent fall on a particularly slick piece of marble. Other than embarrassment, I was fine. 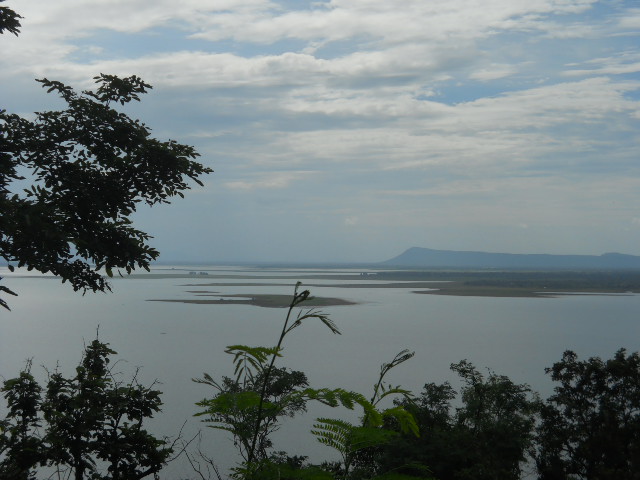 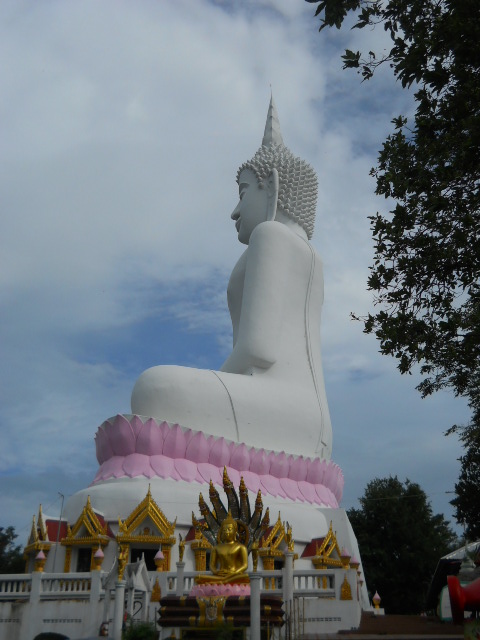 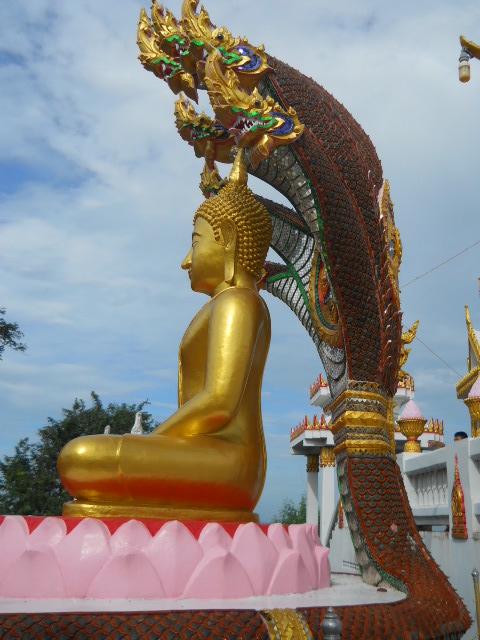 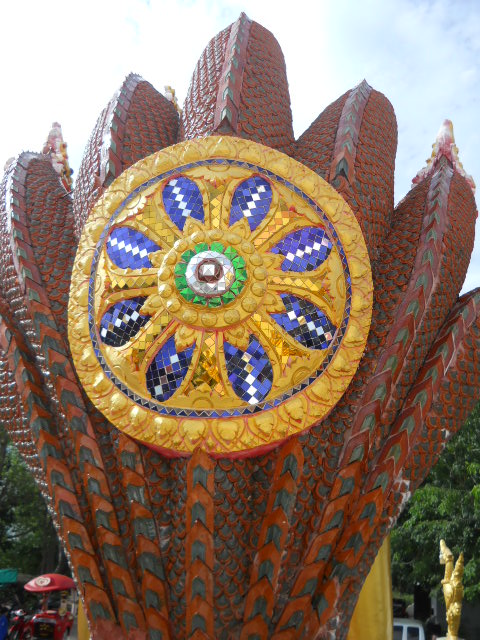 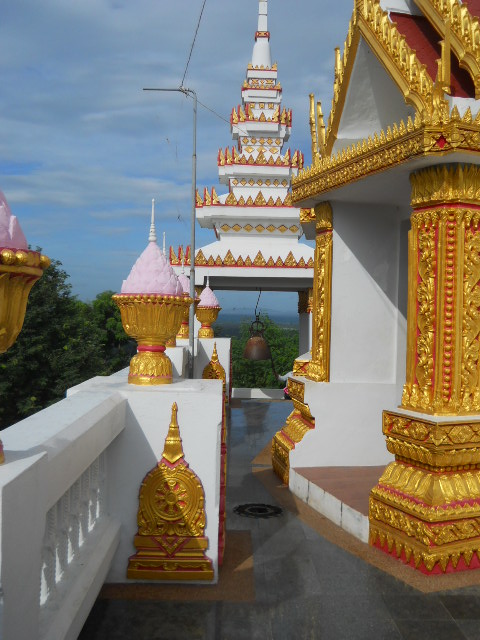 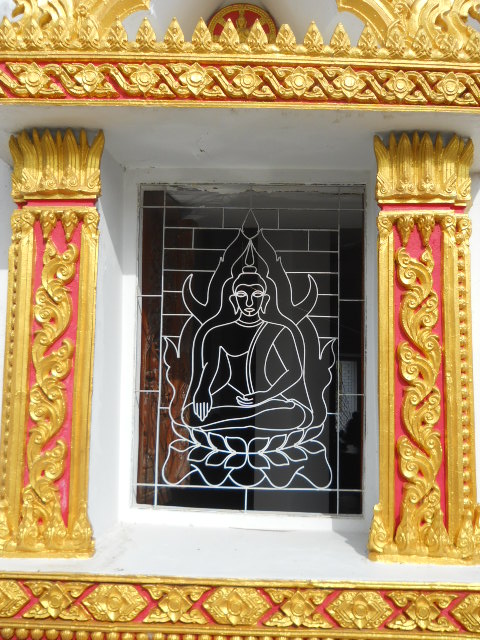 Yesterday, we visited the Wat Nong Wang. This wat was red and gold on the outside with stunning mural on the inside. The murals depict the local culture as well as stories and parables. The wat is also nine stories high, and each floor had a different set of murals and artifacts, and we climbed to the very top to overlook Khon Kaen. 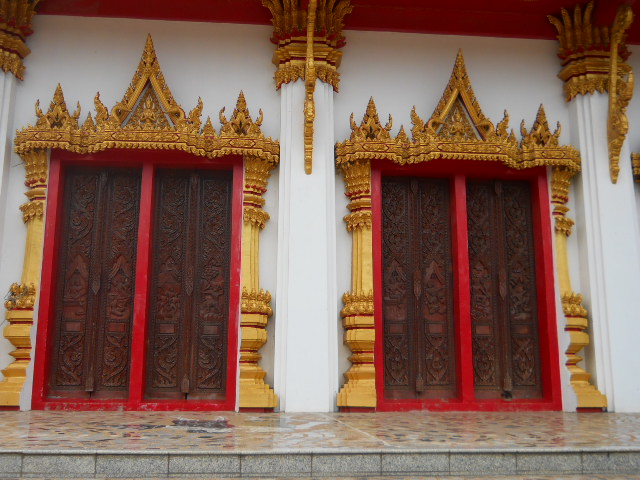 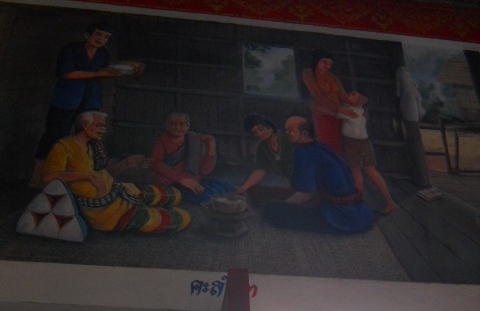 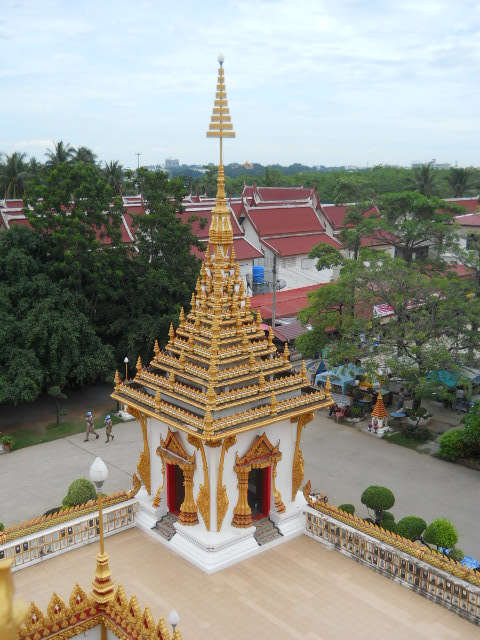 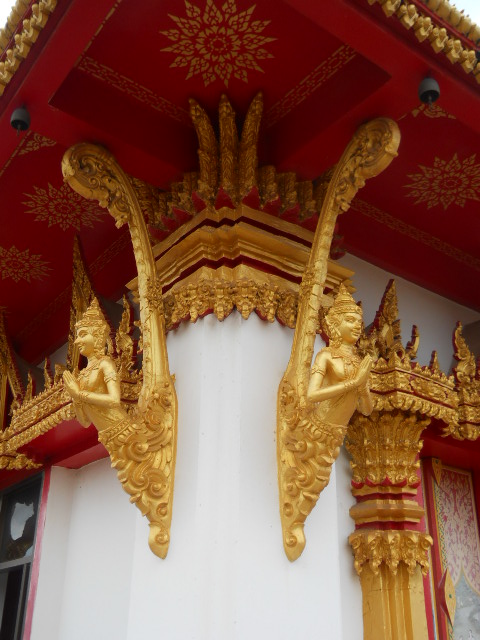 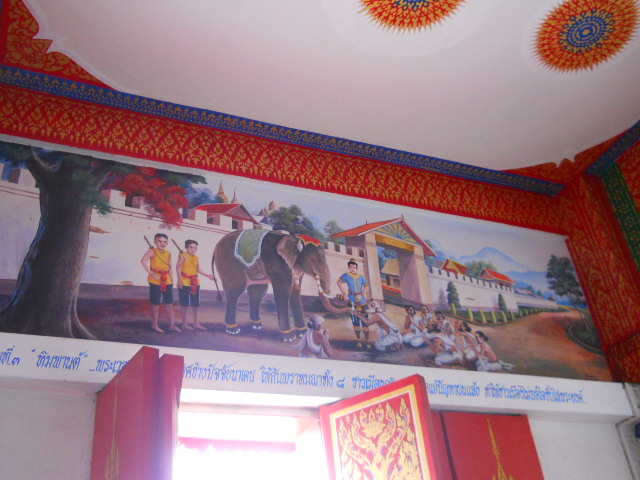 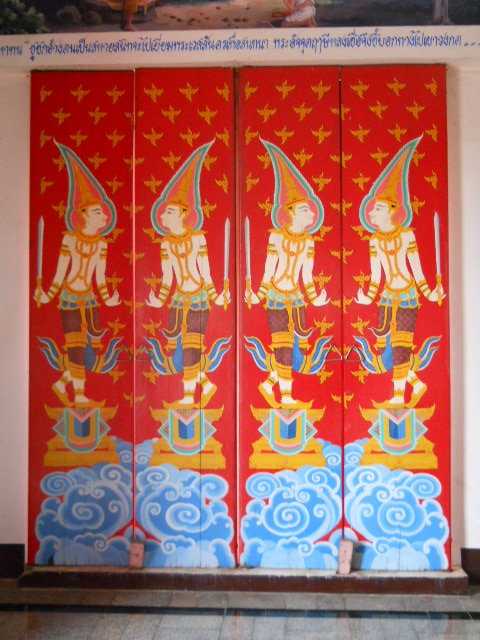 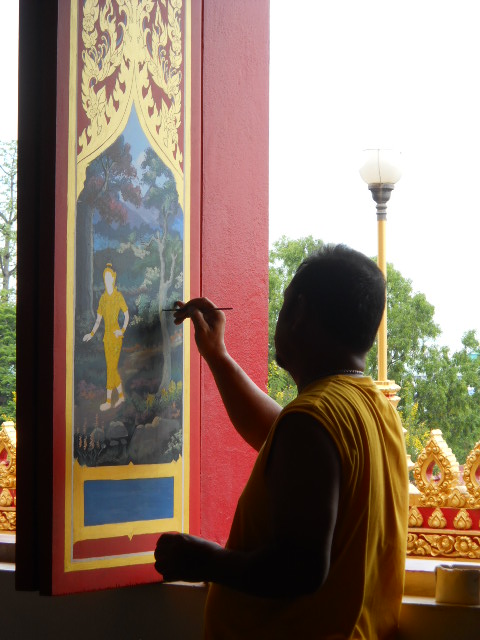 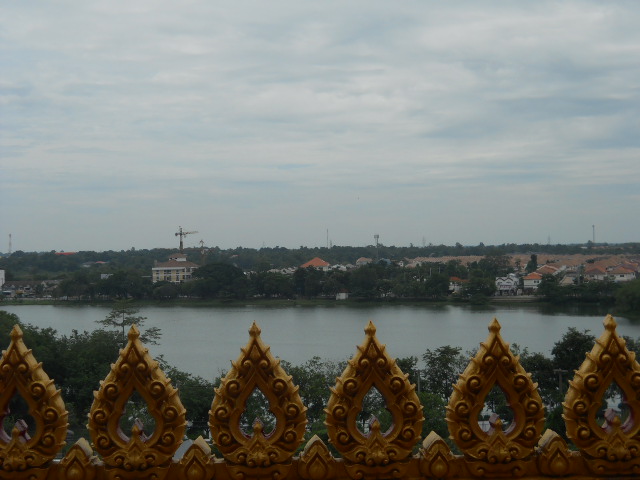 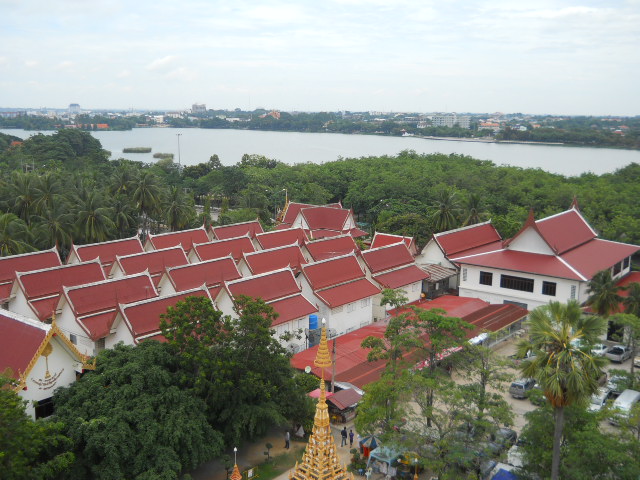 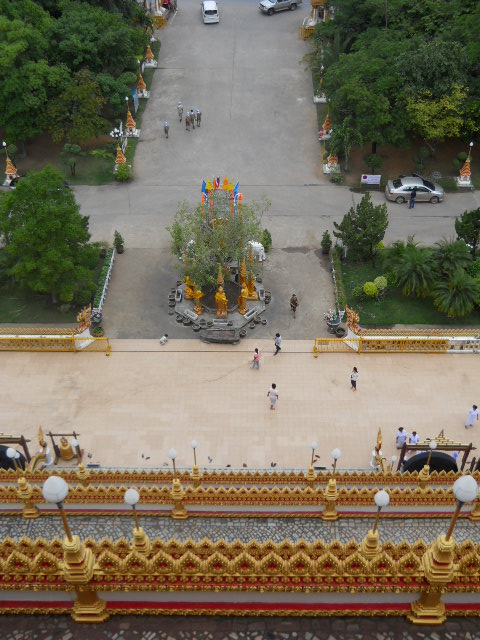 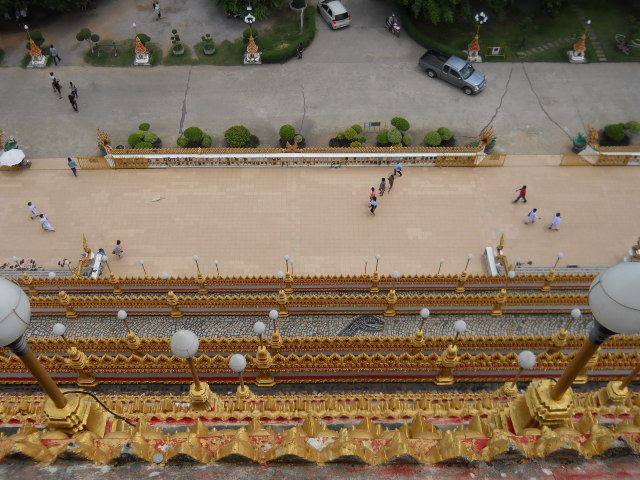 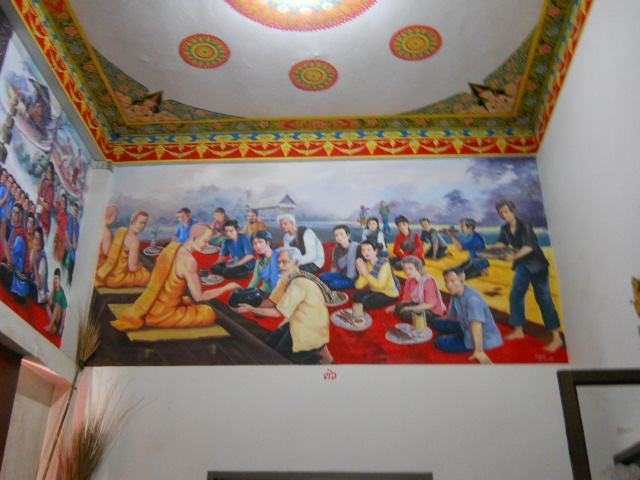 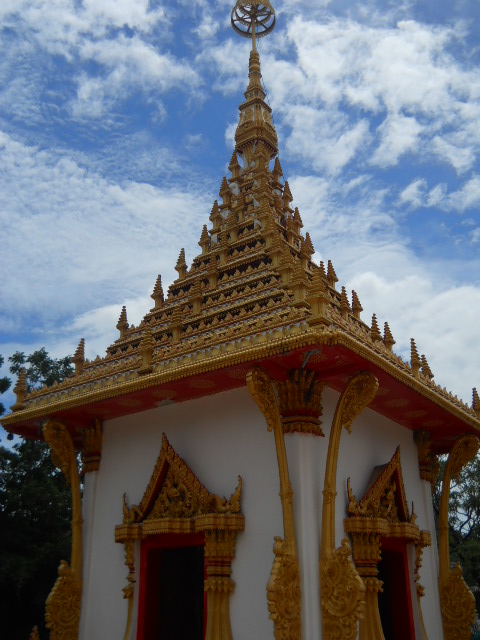 Throughout the city, there are stores called otops, which are cheap clothing and souvenir store. I bought myself a Thai silk tunic, which I am very proud of. I wore it to dinner last night with some of the family's close friends. 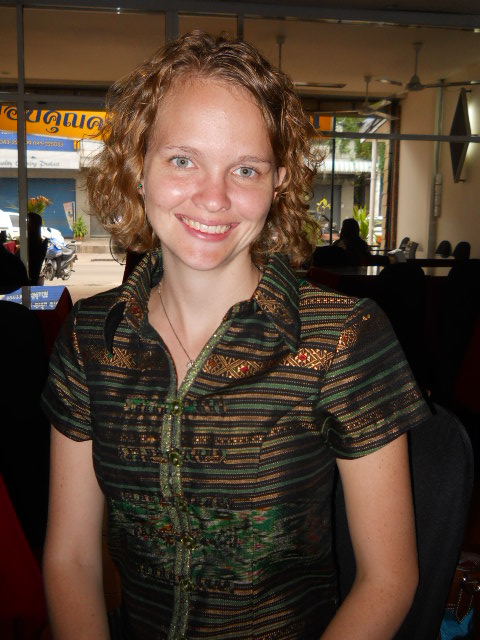 We also got my camera fixed!!! Finally.

Oh... And this is Tigger. He's adorable. He also has a kink at the end of his tail, which is apparently very common in Thai cats. 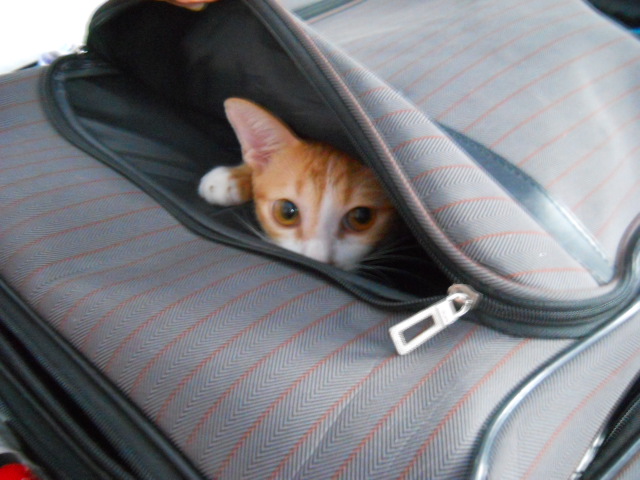