As my time here dwindles, I have just ten days left, I wanted to reflect on the food that I have eaten here. While traveling, I make a conscious effort to avoid eating at the western style fast-food restaurants, of which there are plenty in Almaty, including Hardee's, KFCs, Pizza Hut and dozens of knock-offs. Instead, most of my food intake is street food from kiosks or food from the same restaurants that the locals frequent. 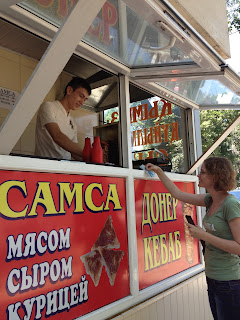 Like clockwork, when noon rolls around, I leave my computer in the office and walk to the underground walkway on Abai street near Baizakov Street for my daily samsa. Dana, one of my colleagues, jokingly named Antoine and I the samsa club. Unfortunately the other half of my club is now in Shymkent, so I am forced to go buy my lunch on my own. Samsa is a stuffed pastry. In Kazakhstan, the pastry is the texture of a croissant with either chicken, cheese or meat fillings. I almost always get samsa with cheese, the meat can be a little suspect. The best thing about samsa is the price, it costs 70 KZT or $0.50. The other great thing about samsa is that you can find it just about anywhere. Samsa in Almaty is not the same as the samsa which is sold in Bishkek. The samsa in Bishkek is made out of a heavier pastry and is not flaky. It was also smaller and more oily than the Almaty samsa. Another major difference is that Bishkek samsa has more an additional filling option, cabbage, but cheese by itself is less common. 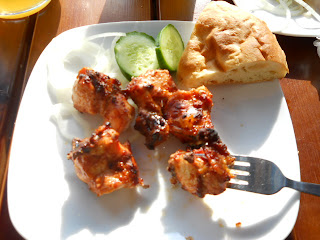 From my earlier posts, you know that I also enjoy Shashlik. Shashlik, or shish kabab, is a staple of the region. It is always done over an open flame and can be any type of meat. In Ufa, my host family would make it with pork and chicken. In Almaty, you can order shashlik sticks of mutton, chicken, beef and chicken kidneys and livers and it is served with uncooked onions and a very strong vinegar. The best shashlik that I've tasted here came from a hole-in-the-wall place on Bogenbai batyr street between Begalin and Kastev streets. Unfortunately, the name escapes me. 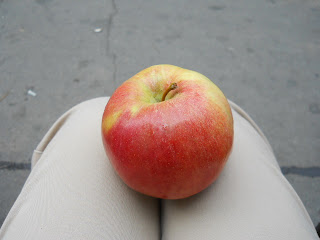 Fresh fruit is very common and relatively cheap in Almaty and even cheaper in Bishkek. I always supplement my lunch with a banana, an apple or, if the price is right, a small melon. Dried fruit is also very popular and can be purchased for cheap in the Green Bazaar in Almaty or in the Osh Bazaar in Bishkek.  I have been warned that you should wash the dried fruit after you buy it because some of the vendors will cover it in oil to make is seem moister than it is. I think washing it is just common sense because there are always bees and wasps flying around it.

Above all, I have fallen in love with lagman, a Uighur dish. There are two types, one is a soup and the other is dry, I prefer that type. Lagman is made with noodles, meat and vegetables, including peppers and onions, and in the case of the lagman featured in the picture, eggs. It is often served with a very spicy red sauce, laza (in the left hand corner), which I have come to love, though the first taste was quite a surprise. According to Asel', laza is made with spicy red pepper fried in very hot corn or sunflower seed oil with garlic. I hope I can find a way to replicate it at home, else I may have to open up my own import market. 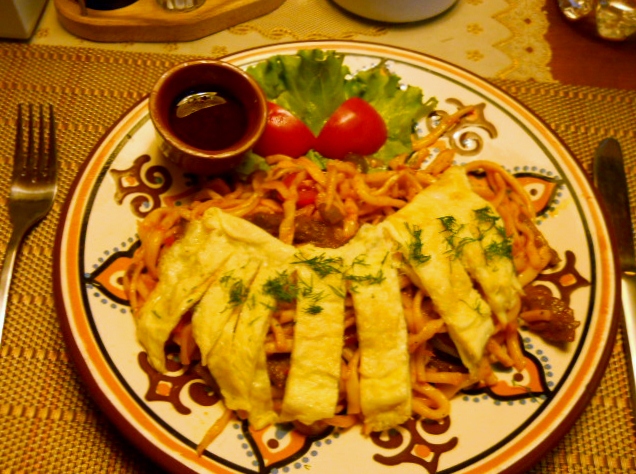 One of the first things people learn about me is that I have a major sweet-tooth, especially when chocolate is involved. Below is Kazakhstan's national chocolate and it is amazing. Its taste is somewhere between sweet milk chocolate and dark chocolate, like nothing I have ever enjoyed before. I wish I could fill my suitcase up to the brim with it and bring it home. Unfortunately, I don't think it would survive Thailand, either it would melt, or more likely, I would eat it all before I got home. 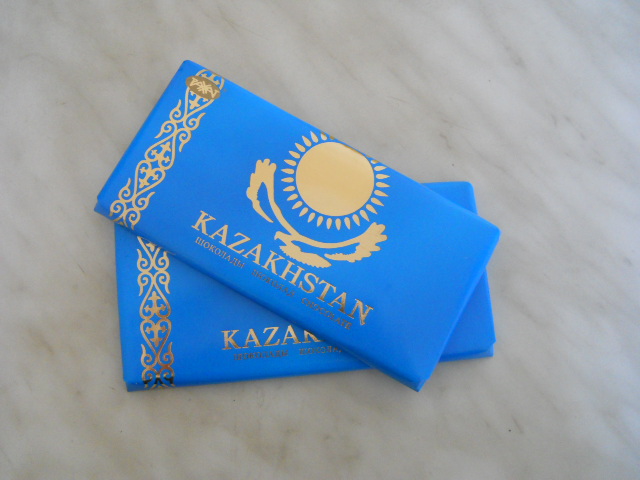