I am exploring Bishkek the same way I got to know Almaty, on foot, for hours at a time. As I had planned yesterday, I left the house early this morning to try to beat the worst of the heat. I decided  to walk down to the Osh Bazaar, which, according to lonely planet, is 3 km from the center. I walked down Chuy Prospect but had to make a detour just before the state history museum. Chuy Prospect in front of the museum and down passed the White House was cordoned off by police cars and I could see that there were police officers congregating further down the road. I decided to  walk south a block. I continued walking down that street, Kiev, until I reached the square across the street from the State History Museum and the tall flag pole that I photographed yesterday. From there, I had a good view of the hundreds of police officers that had congregated in the road. I did not stay around long enough to find out why they were there. 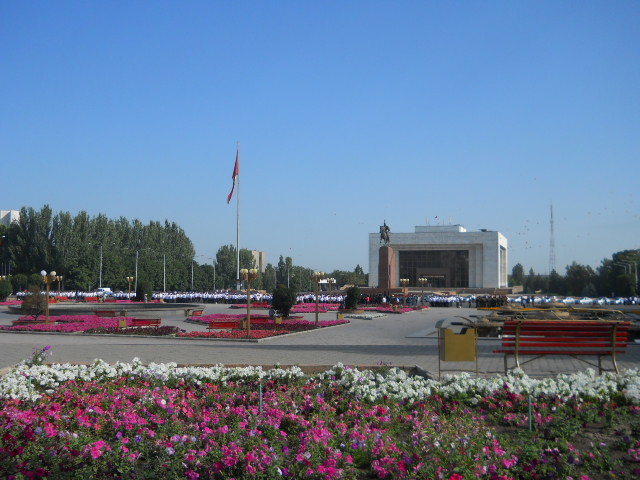 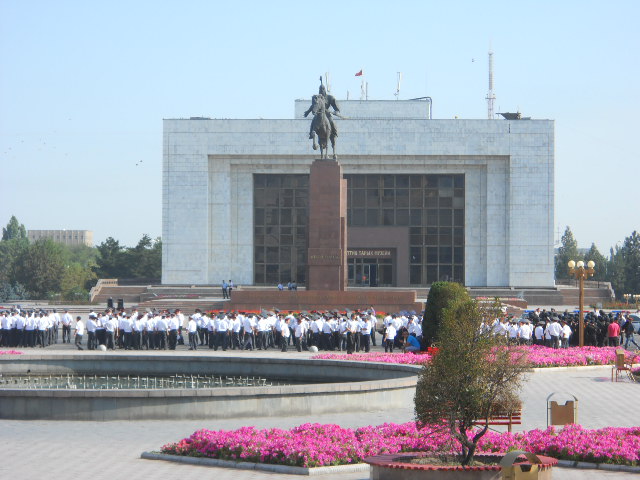 The Walk to The Bazaar 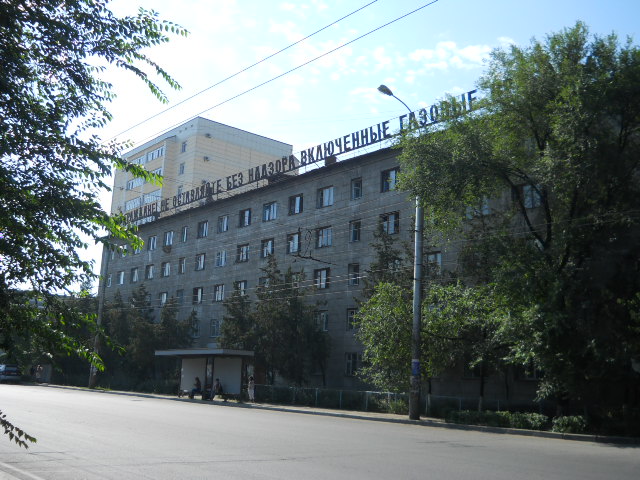 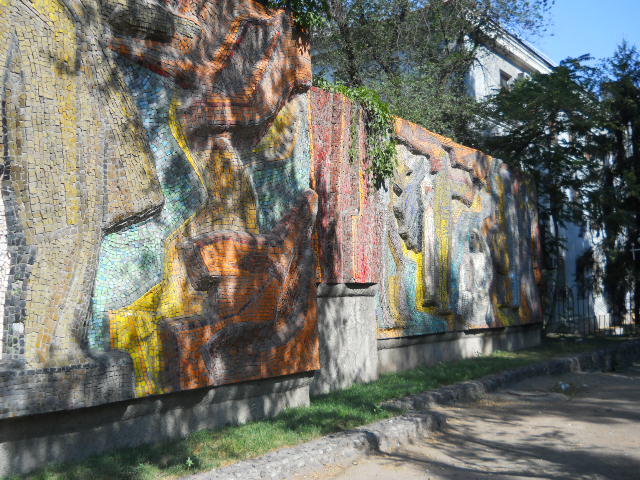 I got to the bazaar forty or so minutes after leaving the square. The bazaar is held in several buildings, hangers and open areas with kiosk. They sell fruits, vegetables, clothing, shoes, traditional clothing and souvenirs. I was there for the souvenirs and the shoes (I had killed off my last pair of non-sneakers on Thursday). It may not surprise you but the further back into the bazaar you get, the cheaper items become. I went way in the back, making my way through clothing stands that had barely a foot between them. While back there, I saw the most beautiful cloth I have ever seen, deep blues, greens, reds and purples, many had beautiful patterns of bead work and gold filigree. It's been a while since I bought a souvenir for myself, but I was sorely tempted to get myself some if only to stare at it. I resisted temptation, just barely, and left the cloth stands and found several kiosks selling traditional Kyrygz souveniers, including felt dolls, hats, scarfs and pictures done on felt. I ended up spending about $50 to get something for everyone on my list.


After the Bazaar, I headed back to the apartment, I plan to relax until the worst of the heat has gone off. One the way, I stopped off to get samsa, which they didn't have so instead I got a hot-dog. The hot-dog was in a long roll of bread along with lettuce, cucumbers, ketchup, mayonnaise and french fries. I ate about half of it but it was just too much. Now, I'm off to take a nap. 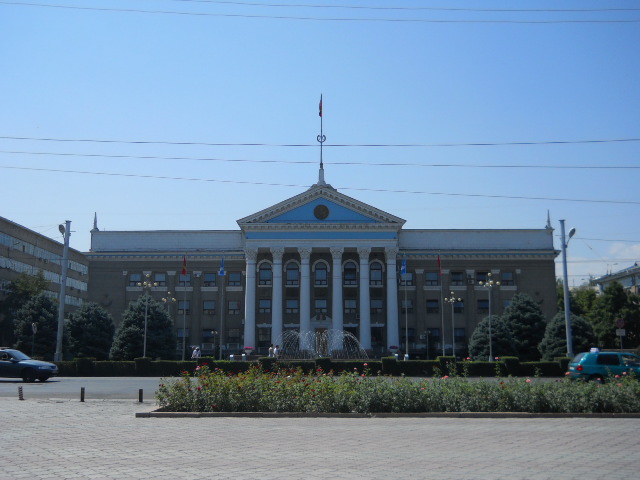 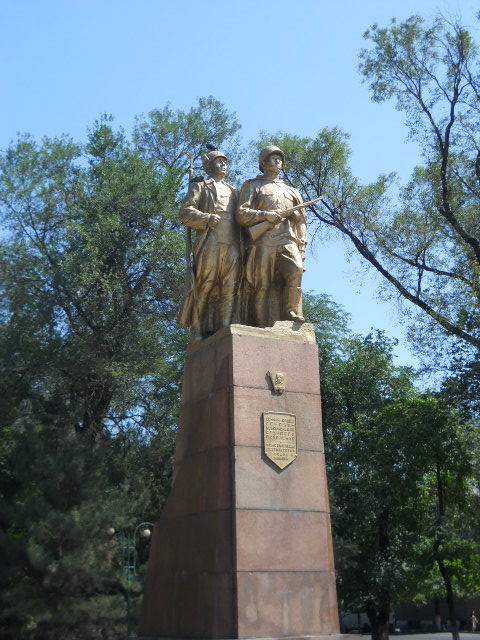 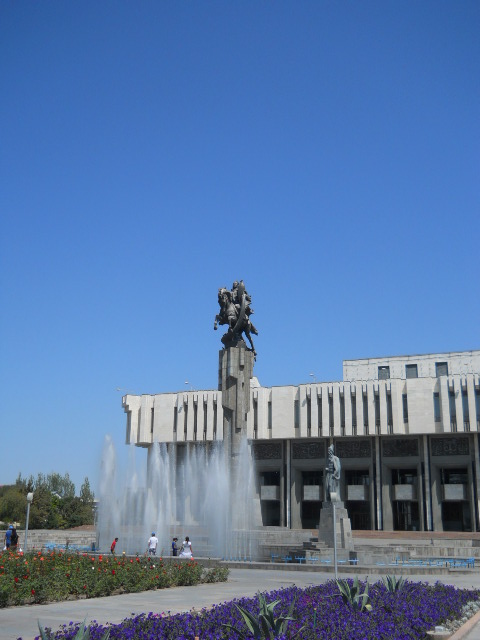 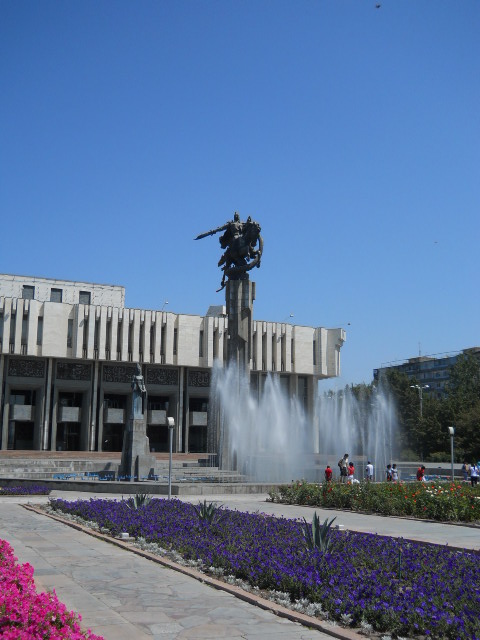