How to get a Kyrgyz Visa and Other Adventures

How to get a Kyrgyz visa:

Actually, getting a Kyrgyz visa is not that difficult. If you are flying into an international airport, you can get one when you land. However, I plan to travel into Kyrgyzstan by car, which should only take about four hours, which means I have to get my visa in Kazakhstan. The Kyrgyz consulate in located in a two-story house one block south east of Abai and Dostyk/Lenin (the intersection where KIMEP is located). I left work an hour early and took the bus down to the end of Abai. I would have overlooked the consulate had Jessica not told me that it was in a house. I approached the metal gates and read the schedule, "documents can be brought between 9 a.m. and 12 p.m." Just as I was about to leave, the guard opened the gate and asked me why I was there. When I told him, he ushered me inside and pointed me towards the entrance to the basement. My nicely printed out visa application was useless, as they made me fill out another one and then sent me off running to the bank. In Kazakhstan, when you have to pay a fee or tuition, you pay it at a separate bank and return with the receipt. So, off I rushed as it began to pour with rain. The BTA bank, one long block away from the consulate, happens to be right next to the U.S. consulate. And just to give you a nice comparison, the U.S. consulate is a modern high-rise building. Having paid, I rushed back to the consulate and gave them my passport, my receipt and a picture. I am now passport-less until Wednesday, something that makes me very nervous. However, I could not justify the $105 price tag on the overnight visa, instead I paid $55 to get it in a week. Keeping my fingers crossed.

Saturday, I met up with Jessica and Antoine to go see Brave, only to find out that it was no longer playing and we were too late to catch any of the other movies and get Antoine back to the dorm by the dorm's curfew. Instead, we went up to Kok Tobe, which Antoine had not seen. The lines for the gondolas were long and populated by screaming children. It didn't help that once we were in the gondola, the change in altitude made ears pop, causing a new round of screaming. Once we were out of the gondola, we spent about an hour walking around the park and had a wonderful view of the sunset over Almaty. 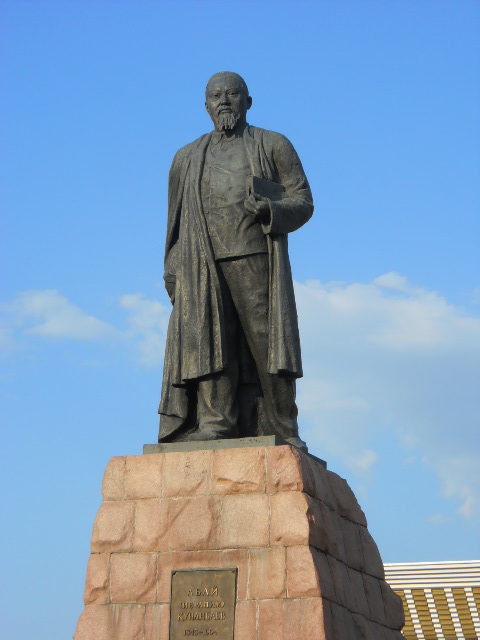 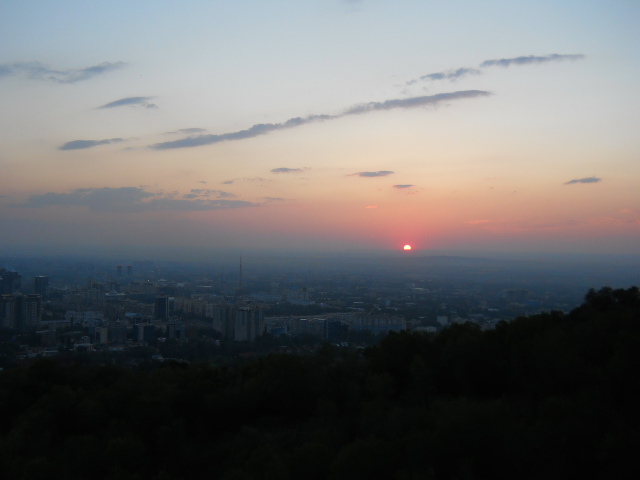 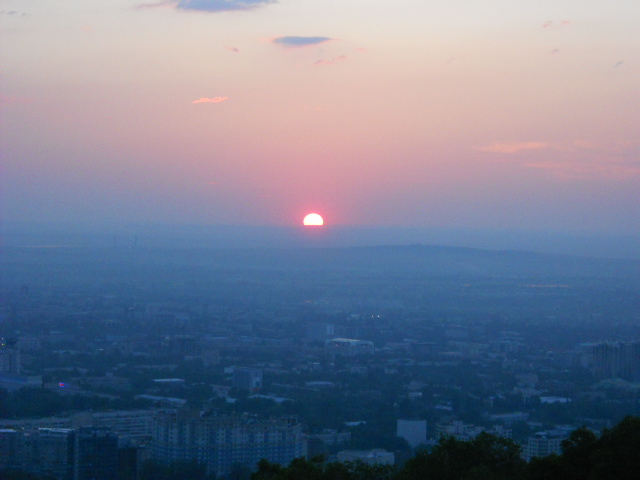 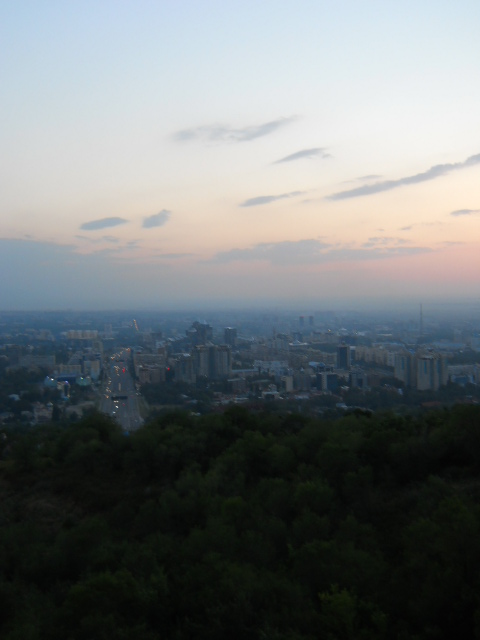 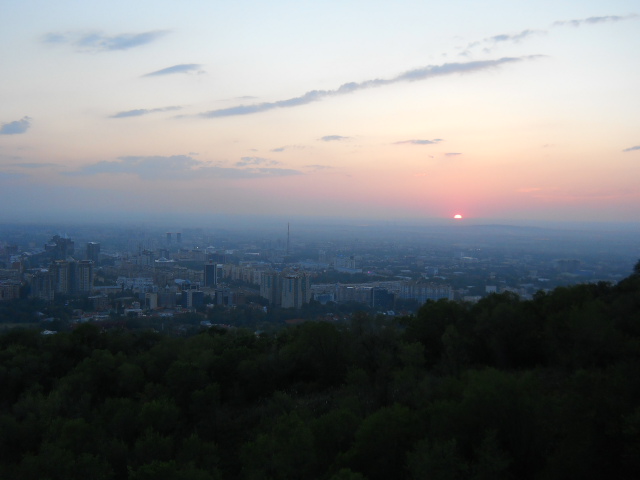 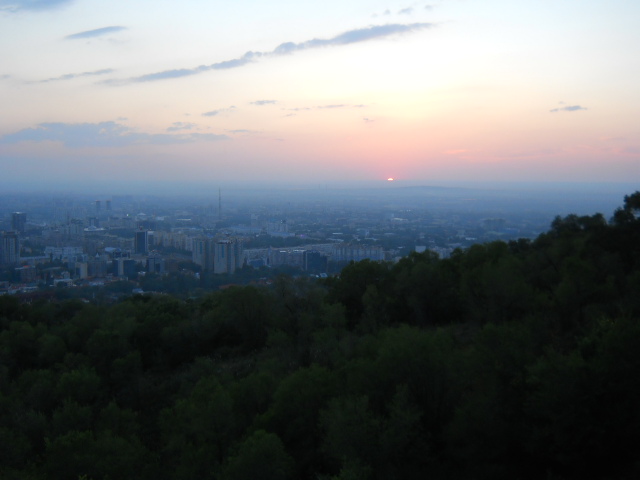 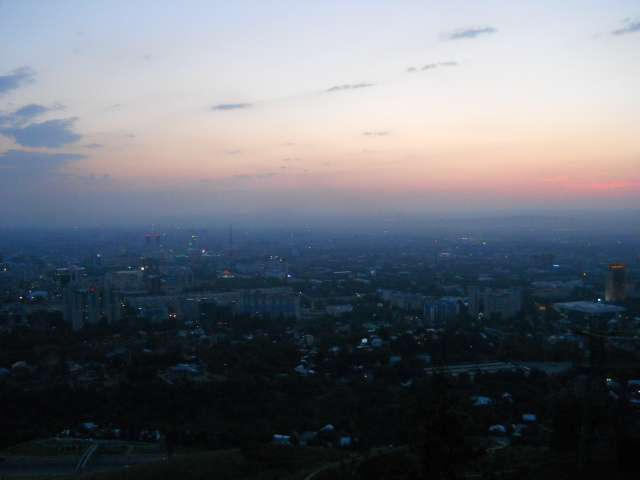 Medeu
This week, I decided that I wanted to return to Medeu and climb the stairs up to the top the berm that was built to protect the Medeu sports complex from avalanches and other such disasters. The berm in plateaued, with a series of steps and then observations points or roads. I stopped at most of them and rested, or just walked around on level group, before continuing up the stairs. Several times, I thought I was near the top, only to realize it was just another plateau and I had a long way to go. I finally did make it to the top and had a wonderful view of Medeu and the valley on the other side of the berm. I wandered for a bit, before returning down to the bottom. As I was waiting for the bus, the taxi drivers converged, trying to convince me that I should take a taxi back to the city rather than a bus. I think that they might have had a competition going to see who could convince me to take a taxis back, one guy would leave and rejoin his fellow taxis drivers and another from the group would converge. However, the choice was easy, 500 KZT for a taxis or 70 KZT for a bus. Seeing as I am on a very tight budget, bus it was. I am now back in my little kitchen and I don't feel guilty at all indulging in an ice cream and some Kazakh chocolate. If all goes well, knock on wood, I will be in Kyrgyzstan next weekend for a three or four days. 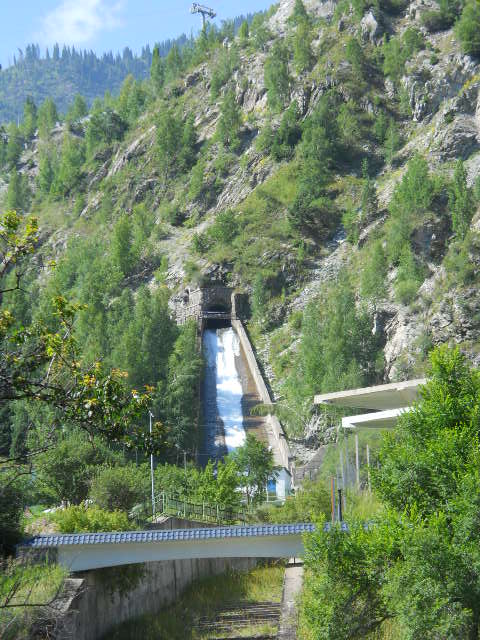 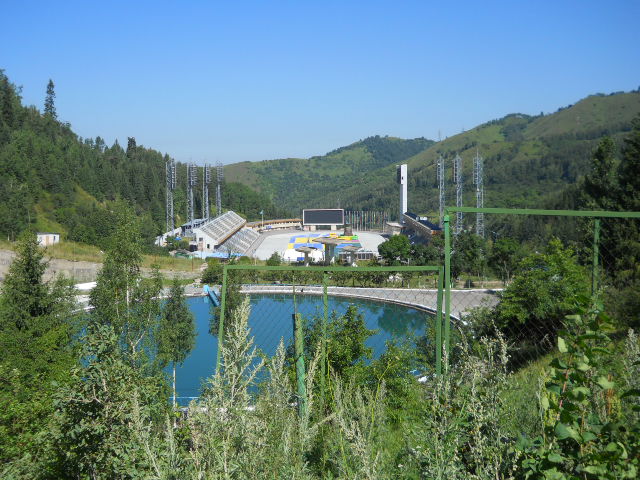 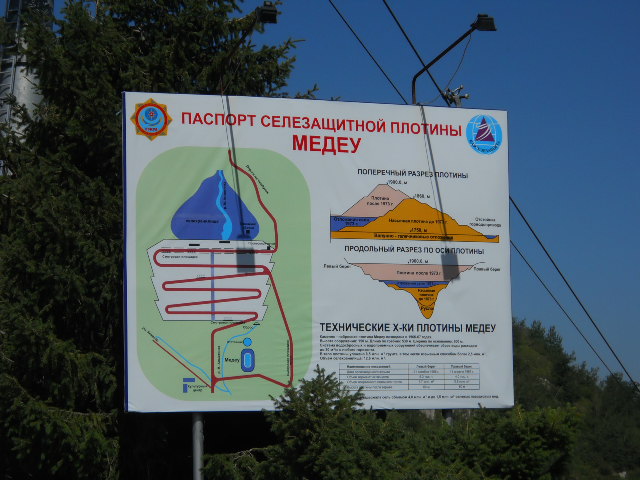 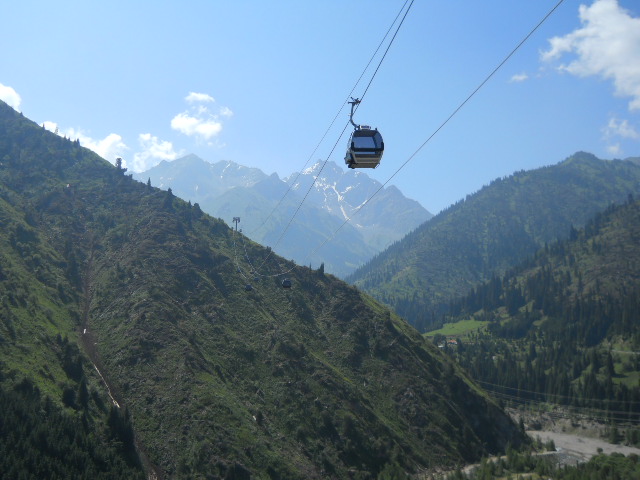 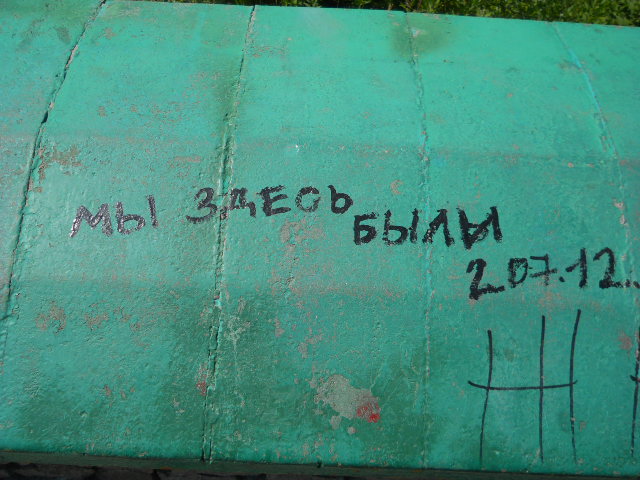 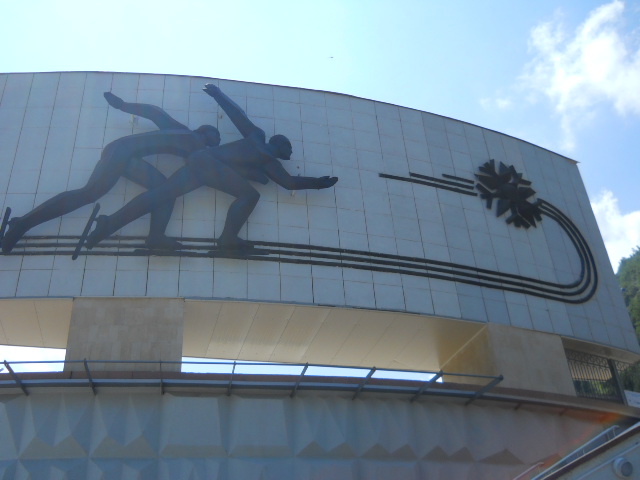 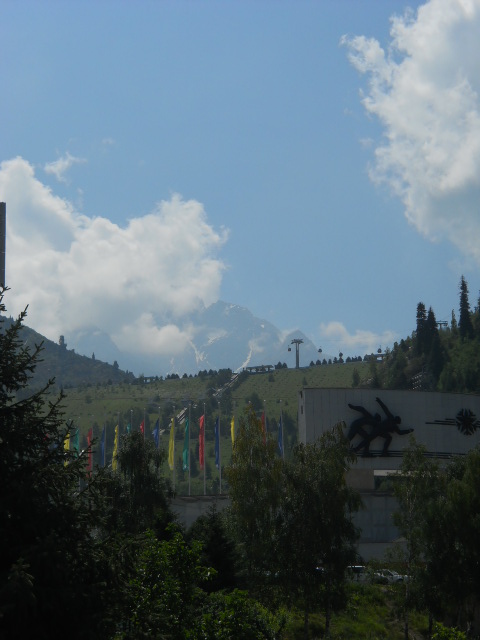 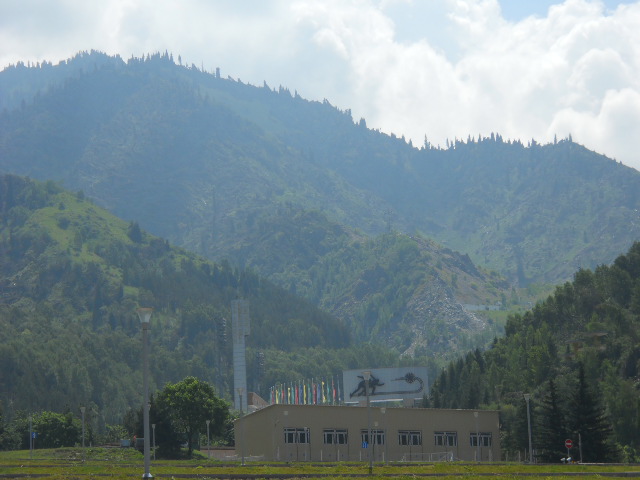 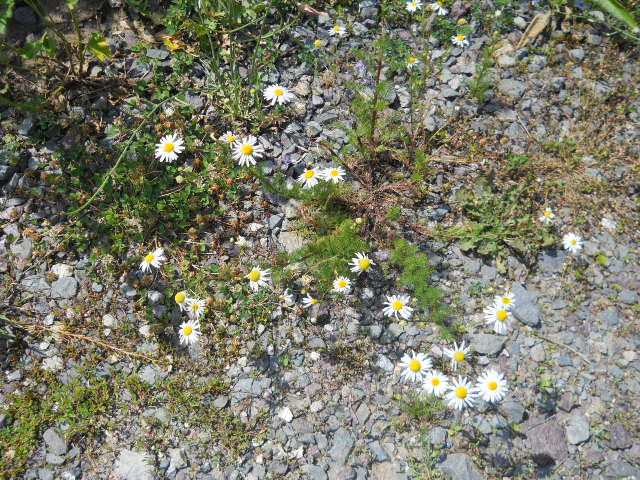 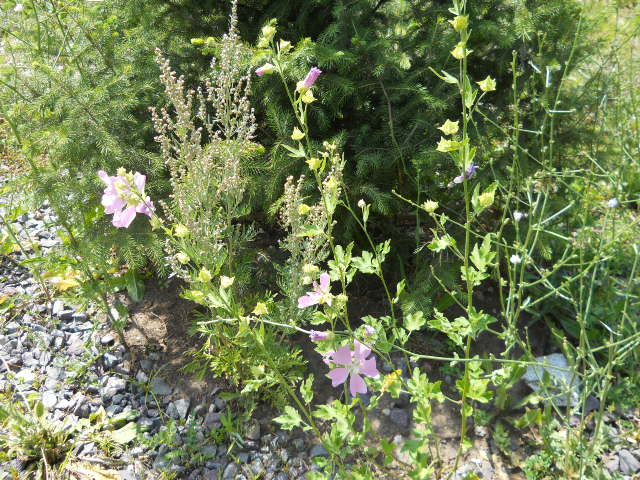 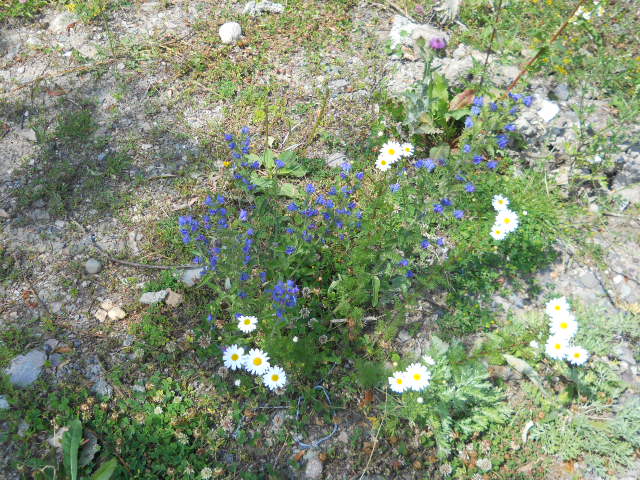 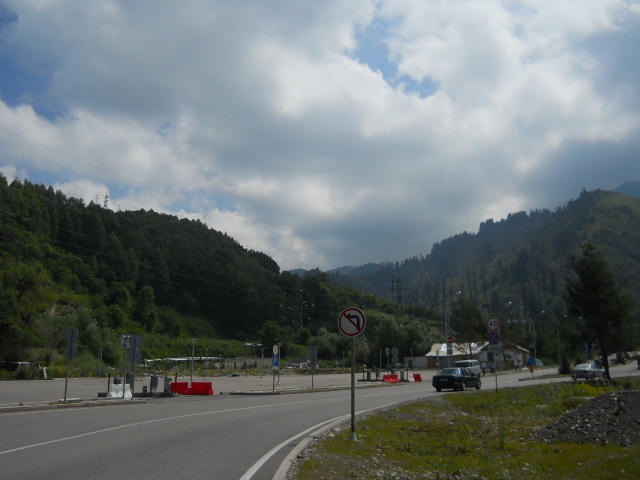