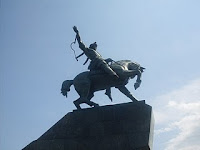 This weekend was our free weekend, meaning that there were not any planned excursions and many of us used the weekend to travel Russia. While many of our students went to the capitals of Moscow and Saint Petersburg, I decided to travel down to Ufa and see my host-sister and one of my friends from UF.

Friday, was a regular Friday. I went to class, took my exam and did my presentation. After class, I returned to the apartment, took a shower and made some purchases at the local grocer. I had decided to try to dehydrate myself because I was frightened that the bus might stop at a rest stop and leave me behind. Since, I am writing this blog, you can guess that my fears were unfounded. My bus was scheduled to leave at seven p.m. from the Kazan’ bus station. As we were lining up, to have our tickets checked, I noticed quite a few drunks preparing for their trip to Ufa. I was hoping and praying that my seatmate would not be one of them. Thankfully, my seatmate was a lovely older woman, who nick named our drunken companions the “happy grandfathers.” The happy grandfathers, much to my joy, drifted off to sleep, without incident. The first hour and a half was murder. There was no air condition on the bus and the sun was still shining brightly, the bus was akin to an oven. Once the sun went down, it was fine, and even a little cool. We did stop three times for a rest break, and I did get up and use the facilities and managed to return safely to my bus. 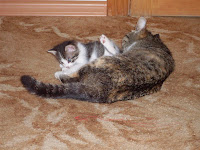 I also, somehow managed to sleep on the bus. How, I have not yet figured out. I did have a window seat, which helped matters, I could rest my head on the window frame, but I felt every bump in the road from Kazan’ to Ufa. We actually arrived in Ufa early. I woke up about five thirty just in time to see us pass the sign for Ufa. The bus pulled into the station at six-ish and I went in and purchased my return ticket before texting and waking Inna. Inna picked me up about seven. It was great to see her, but we were too tired to have a decent conversation. I got to the house, had a little breakfast, met the kitten (who is the subject of most of my photos), saw Brittany briefly and then took an hour nap. I woke up at about half-past ten, feeling much more like myself and went out to spend time with Inna and Brittany. Brittany is in the same program I was last year, CLS Ufa, and we began Russian together at UF. I finally heard how Inna ended up with Brittany as her student this year. She saw that we were from the same state and chose Brittany based on that. After making her choice and returning home, she checked Facebook and found my message, in which I told her Brittany was coming and that I wanted them to meet.

So, what did I do on my free weekend? Well, I went on an excursion with the CLS Ufa group. We went to a lake, outside of Ufa and stayed there for eight hours. The lake was beautiful, deep and freezing. I was not brave enough to take a dunk, but many did. We also each got a chance to make blini over an open flame. That was fun and I managed not to burn mine. 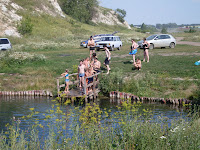 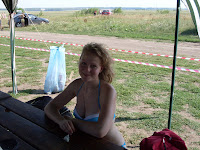 It was interesting sharing my experience with the students of CLS Ufa and they, in return, shared their experiences with me, and asked me about Aygir. Yes, that children’s camp, that I mentioned in my last Ufa post, but never expanded upon. It is beautiful, located a few hours outside of Ufa in the mountains, in the middle of nowhere. It would also be great for a weekend, but sticking twenty-odd American students in the wilderness for a week, without privacy, with a constant supply of alcohol and expecting them to learn, is a fool’s errand. I tried to be positive, and give them advice on what to expect and what to bring. Not surprisingly, they had already come to much the same conclusions that my own group had come to prior to going to Aygir, and those conclusions, were mostly right. I also had a good conversation with Oleg Alexandrovich, the Russian director in Ufa, I guess he is in the works with a US university, to set up a sister program of sorts, and was curious to know how our program is being run here. He also offered me a job at the same camp in Aygir teaching Russian children English, next summer. I may take him up on that.

We returned home about eight and I was finally able to take a much awaited for shower. There had not been water pressure that morning, so we were lucky to get it in the evening. In Ufa, I used to get up at six because of the possibility of a hot shower with decent pressure. I also was able to see babushka. She was quite happy to see me again and we sat up, with Brittany and Inna, till past midnight talking before I begged out and headed to bed. I woke up at seven-thirty and watched mama-cat, Kisa, and the kitten play before going to wake Inna. Babushka packed my up lots and lots of fruit, an ice cream tub full of cherries, a jar of raspberry preserve, and half a two litter bottle of raspberries. Inna and I headed to the bus station and Inna saw me off, as I began another ten hour ride back to Kazan’. I, by some luck, managed to get the seat that the air from the roof vent managed to blow right on me. I spent the ride reviewing vocabulary words and reading Game of Thrones. About two hours outside of Kazan’ we began to pick up people on the side of the road. I assume they were return to Kazan’ from their dachas. I am also confident that the fares that those people paid went to our drivers and not the bus company. We returned to Kazan’ about six and I headed home and relaxed. It was an early night for me.

Only three more weeks to go, and next weekend we head to Nizhniy Novgorod.

Disclaimer: The opinions expressed about the CLS Ufa are not the opinions of American Council or the State Department