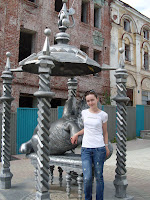 I have survived week two in the city of Kazan’. Following class on Monday, we had a free afternoon. Instead of returning home, I stayed in the center in order to meet with my language exchange partner. Masha is a very sweet girl, about my age. She learned English for two years, a few years ago. She was a former student of my teacher, Gulnaz. However, for the past few years, she has been studying veterinary medicine and has not had the time to study English. We spoke mostly in Russian, as we walked around Kazan’, with me throwing in a few English words or phrases. We have agreed on a topic for our next outing, so she can prepare her English ahead of time. Masha’s biggest problem with speaking English is fear, fear of making a mistake. This is the most crippling thing for learners of another language. You cannot be scared to make mistakes, it is going to happen, but most people will still understand you. I will, hopefully, see her sometime next week, when I have another free afternoon.

Tuesday, we had a lecture on human rights and Russia. The lecturer, gave a presentation on all the human rights that exist on paper in the Russian Federation and then on the enforcement, or lack thereof. It was very interesting; he used recent incidents to illustrate Russia’s lack of consistence on protecting human rights. He concluded by saying that it was his belief, that a regime change was necessary before human rights would be fully protected in Russia. 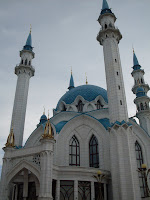 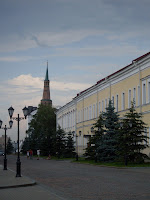 Wednesday, we toured Kazan’ Kremlin. Kremlin means fortress in Russian, and it is obvious that, that is what Kazan’s Kremlin was meant to be. A high wall surrounds it and from inside the Khan’s once ruled. Ivan the Terrible invaded Kazan’ and the mosques in the Kremlin weredestroyed. After the invasion, an Orthodox Church was built inside, which was later partially destroyed under Soviet rule. In 2005, Kazan’ celebrated its thousandth year. In honor of that anniversary, a new mosque was built and the Orthodox Church and its interior icons were restored. The mosque is one of the largest in Europe and every Friday and on religious holiday, it is overflowing with believers. The prayers are not called outside the mosque, in deference to the church next door. It is also for this reason, that the church does not ring its outside bells, in respect of the mosque. If the citizens of Kazan’ and Ufa can live in peace, why can the rest of the world not manage? We toured both the mosque and the church and then continued on to Kazan's Hermitage.

The Kazan’ Hermitage was a gift from the Hermitage in St. Petersburg, for the thousandth year anniversary. The exhibition was “art and weaponry.”

Yesterday, Thursday, was not very interesting. It was a free afternoon and I studied the entirety. That was seven, very long, hours of studying. I was exhausted, but the 91.5% was payoff enough for my efforts.

This afternoon, Dr. Livingston gave a very interesting lecture on Russian Intonation patterns. There exist seven primary intonation patterns in Russian, which are often misunderstood by foreigners. So, every time I thought I heard one of my host sisters, I have had three, speak in a frustrated manner to their parents, in fact that is just the intonation of the question. Who knew? Dr. Livingston also explained certain non-verbal communication to us. He compared the Russian smile to the American smile. According to him, Russians smile when they are happy. We, Americans, smile when we are happy, but also when we are serving someone in a customer service situation, and to prove that we are not threatening. The best quote thus far, “How do we know the Russian is not threatening? When the Russian does not attack us.” Tomorrow, we are taking a bus trip to the ancient city of Bolgar. That, however, is for another blog post.