TIR: This is Russia

26.6.2011
I have returned to Russia again, this time to Kazan’, the third capital of Russia. I arrived here last Saturday, the eighteenth, after twenty-four hours of flying. I am back, once again, to study Russian. For me, this is catch up. After Ufa, I returned to the University of Florida for a semester before graduating in December. I spent the following semester working in Gainesville. Despite my best intentions, I lost much of my Russian. This coming fall I will be enter Columbia University’s Russian Eurasian East European Regional Studies Program, and I feel my Russia is not up to par with the task ahead, so I am back. 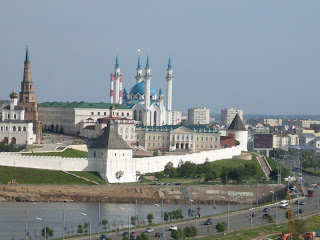 I arrived Saturday evening and we were taken by bus to our host families. I am now living with a wonderful girl, Lena, in a quaint one-room apartment about thirty minutes from Kazan’s center. We stayed up for a couple hours following my arrival, drinking tea, before heading to bed. I slept till well past eleven the next morning.

The next day, Sunday, we took the bus to the center of the city. Lena wanted to show me how to get to class using the bus system. We walked around for hours before returning to the center. We were heading to meet some of Lena’s friends at the mall when I manage to trip going down the stairs of the road crossing. I skinned my legs up pretty badly. We met up with her friends and headed to the amusement park across the river from Kazan’. The only ride we went on was the Farris wheel and from the top, we got a wonderful view of Kazan’s Kremlin. Lena and I returned home, relaxed and drank tea. The tea was a bad idea, an hour and a half after I fell asleep; I woke up and stared at my ceiling for five hours, before falling back asleep for about two hours. Guess who barely functioned on her first day of class?

Monday was, of course, our first day of class. I travelled to the main campus by sardine can, sorry, by bus. It is quite uncomfortable, this lack of personal space, heat and body odor, I was quite glad to get off the bus. I have since discovered the better buses to travel on, we are still close together, but it is more like a cattle car than a sardine tin. I, finally, was able to meet the other students. We were sorted into three classes, second year Russian, third year Russian and fourth year Russian. I am in the third year class with seven other students. There are also three students learning Tatar. My teacher is Gulnaz, she is very nice, though I think we frustrate her at times. She is not like patient Galina or Dr. Goodwin from UF. After class, we had a mandatory meeting with our American director, Dr. Livingston and Aygul, our Russian director. They explained procedure and safety to us, all the usual, do not drink the water, carry your passport at all times, etc. After the meeting, I went home, studied and fell asleep.

After a full night of uninterrupted and blissful sleep, we had a vocab test the next morning. I did well, it helps that I have used the book, Political Russian before. We have class four hours every day of the week, where we cover grammar, vocabulary and necessary constructions for life in Russia. Wednesday, after class we took a bus tour around the city. Like Ufa, Kazan’ is a city of two peoples, the Russian’s and the Tatars. For two hours, we toured looking a different monument and entered the Mosques and Churches. 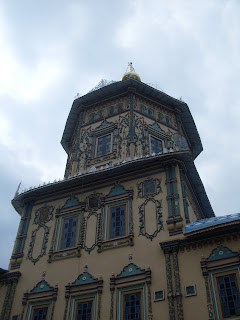 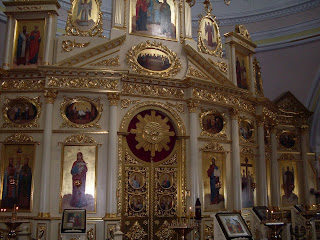 Wednesday, after class, we met with university students, to gain more contacts. My little group spoke to, two girls, one from Vladivostok and the other, an international student from Baku, Azerbaijan. Both were very interesting. After an hour of asking and answering questions, we exchanged contact information and they left. Following their departure, I stayed for a lecture by Dr. Livingston on vocabulary study techniques. He is a brilliant professor from ASU, who is fluent in who knows how many languages, one of his students said thirteen. He is currently learning Tatar and sitting in on one of the Tatar classes.

Thursday, I was introduced to a Russian traffic jam. I caught the trolley bus at my usual time and stop and it was decently congested in the center of the city. That is normal. I thought we were free and clear and then we came to a stop at the Kremlin, and we sat there for a good hour and a half. People got off the trolley bus to walk. Why? I don’t know? It was not like there were buses to catch further down the road. They were all stuck in the same traffic jam, we picked those same people up when we fianlly left the traffic jam. I had a test Friday, and was going through my notecards and a sheet of paper with words and prepositions. I was trying to do this discreetly, so as not to draw attention to my lack of Russian. Finally, after thirty minutes of not moving and no end in sight, I pulled out my Russian textbook and began to study. The woman next to me, kept looking over and finally I admitted that I was studying Russian. For the rest of the traffic jam, and the ride home, I spoke to two lovely Russian women, who were very interested to meet an American student. Once we finally got out of the traffic jam and were driving home, the heavens opened and it poured with rain. If I did not know better, I’d say Kazan’ has a weather pattern similar to Florida, but Lena assures me that this is unusual. I guess, I bring unusual weather with me.

Friday was a test; I do not think I did too badly. The grade does not even matter for me; this program is for my language learning not for a class credit. After class, we went to a group lunch at a restaurant, which was supposed to look like country Russia. The food was decent, whatever dessert was, was amazing. It was a soft bread with raisins, cinnamon and rice, I’m not sure what it is called but I want it again. 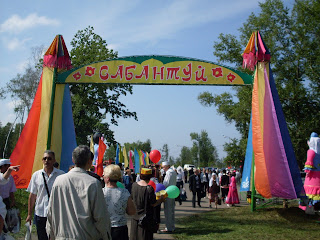 Saturday was Sabantuy, a Tatar national festival. I went with Lena, her brother, sister-in-law, and nephew. People in national costumes opened the celebration with dancing and singing. 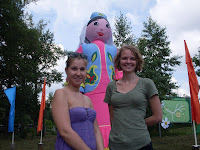 We then watched the competitions. Arm wrestling was a favorite, Lena’s brother participated, he won two rounds and lost two rounds. There was also regular wrestling, the participants of which, I think, were wrestling students. There was also a competition in which a man to climb a very tall freestanding pole using just his body. Six or seven completed this and came down bleeding from their legs and chest. There was also weightlifting and using beanbags to knock an opponent off a sideways log. The three winners of every competition received prizes. These included water filters and DVD players, a car, a ram and a rooster. 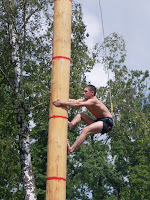 We returned home from Sabantuy and went to the dacha of one of my host-sister’s friends. It was her birthday and we had a big celebration. We ate, and we ate and we ate again. Russian cold salads, and bread with caviar and shashlik. The other eight girls all got a little drunk. Mostly, I just sat back and listened; sometimes I joined the conversation or had a one on one conversation with one of the girls. The dacha itself was very interesting. It was large, three rooms downstairs and an attic upstairs. It had a kitchen and a large garden. Many Russian’s have a family dacha, away from the city, where they grow food and relax. This dacha also had… an outhouse. Needless to say, I made a conscious effort not to have to get up during the night to make that trip.

We returned to Lena’s house on Sunday, earlier than I anticipated. She got a stomach bug; I think it was from of the last batch of shashlik that was not fully cooked. I have been studying, writing this blog has been the first free time I have had all week; all my other free time has been used for studying and reviewing.

Also, thank you mamichka, for scanning me my grammar notebook. You are a lifesaver. Now I just need to find a place to print it.