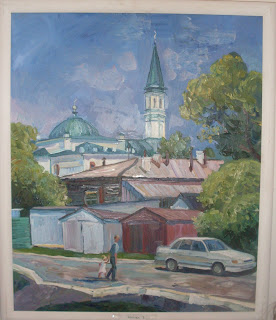 We just finished our last week of classes in and are heading to Aygir for a week. The week went by quick and most of the classes were pretty laid back except for one class where the teacher has little patience for us lower level students. There are a lot of rude remarks directed at us about how the students in the first and second group understand something and we don’t. I’m glad that I will not have to ever deal with him again in an academic setting. All my other teachers have, of course, been wonderful. I will miss them.

We visited the museum-house of the artist Tulkin on Tuesday, where we were able to see much of the artists works. The guide said that Tulkin usually complete painting in a day.

On Wednesday, Rachel's host family invited some of us over for dinner. They made mountains of food, including an attempt to make American pancakes. Afterwards we sang karaoke, or to be more correct Tom made parodies of some of the songs that were popular when I was in elementary and middle school. After exhausting the English songs we moved on to the few Russian ones, including the Little Duckling Dance (Chicken dance).

I managed to miss the last day of classes and the boat ride down the White River to a rather unpleasant twenty-four hour bug which had me fearful of leaving the vicinity of the toilet. Thankfully, I seem to be mostly recovered except for the stomach ache that the Russian version of ramen noodles gave me last night.

In about an hour our group will be heading to the foothills of the to spend a week at “camp.” This could go either way, but at least it should be beautiful.