Next Time Warn Us When Our Excursions May Be Life Threatening

Yesterday was a day that deserves to be put down in writing. It started early; I was up at six thirty in an attempt to get a warm shower, which failed. Around 8:30 am, Artem comes down stairs to tell me Inna is ill and can not come on the excursion with me. I thought that might happen, she had been feeling unwell the day before. Artem drops me off at the second campus and we load the buses. The first hour of the bus trip, the guide, also named Artem, jabbered away on a microphone that did not work properly, so half of what he said was muffled and unintelligible. We arrived at a little store and nearly gave the lady behind the counter a heart attack, apparently you pay for the water and then you choose the bottle. After being completely disgusted in the outhouse, we continued our drive. We got about five minute from the stop and our bus pulled over for mechanical reasons. We stayed in place for about thirty minutes before continuing on our way. The rest of the ride was quiet and uneventful except for having to stop to allow a heard of cows to cross the road. 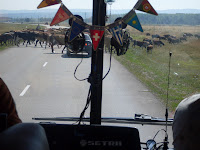 We continued driving through tiny villages where cows and goats moved as freely as the people through the streets. Two and a half hours, driving time, after we left , we arrived at the bus stop. There wasn’t a house or person in sight, just a long winding dirt road. Slowly twenty six Americans, their tutors, Artem the guide, Oleg Alexandrovich and Bo made our way down the dirt road. 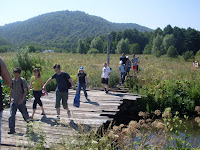 We arrived at the camp grounds, where we were given mats and sat on the ground waiting for the food to be made. Soup with fish… yum? I don’t know what I was thinking when I pictured our excursion to the caves, I guess I was expecting something like Mammoth Caves in the US, somewhat touristy, with toilets. Oh how wrong I was. I discovered has stinging nettles, unfortunately it was as I was using the toilet in the woods and they met my backside, I itched for hours.

After lunch we prepared for spelunking. Got to love the new fashion statement; bright orange helmets. 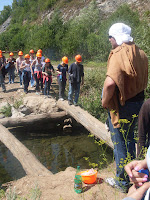 We walked along another trail for forty five minutes, crossing logs or jumping rocks to get across the stream. There were wild raspberries along the path, which were a welcome treat in the hot summer sun. When we arrived at the cave, the breeze that greeted us from the mouth was well worth it. 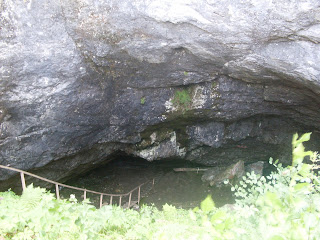 The stairway in looks deceptively easy, but that was only part one. See the log at the bottom, look for the rope. We had to hold on to that rope as we went down a metal ladder and then foot holes cut in to the stone which were slippery and dangerous. I went the whole way down on my knees too frightened to stand. The fear inducing climb down was worth it, as I was greeted with a beautiful cave with ice sculptures created by time. 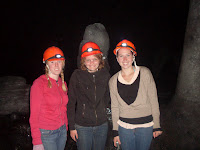 It was freezing down there, but well worth it. I declined to go on the on your stomach part of the expedition, it was too cold and I was ready to warm up. Return to the entrance was much quicker and easier than going down and I was happy to be warm. The walk back also seemed quicker, probably because we knew where we were going, and the sun had moved so it was not as hot.

Dinner was buckwheat and sausage and afterwards some Americans and most of the Russians participated in the tourist banya. They went in, got really hot from steam and than ran very quickly in to the stream to cool off and then most went back and did it again.

After the banya we returned to the bus and began the journey home. We left the excursion sight at 10:30, we were suppose to be home at nine, we arrived at 12:30 am and I got home and collapsed in bed at 1 am and slept, for ten hours. 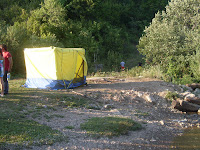