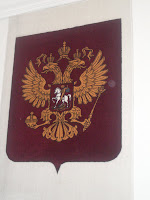 So here’s a quick run down of the weekend. Saturday was spent at home studying, as Inna prepared several different dishes for some family friends who were coming over that evening. The friends, a colleague of Artem, and his wife and son, arrived at around about six. Artem grilled shashlik and the two of them proceeded to interrogate me on everything they could think of about . Six hours later, they finally left and I fell exhausted in to my bed.

The next morning was of course, of July. So how do twenty eight Americans in the middle of , celebrate the ? By going to a Scottish restaurant, of course. Yes, there is a Scottish style pub in downtown and we were crammed in to the back porch. I was a big spender, buying my self a nice, juicy steak.

Monday, was interesting, we have a new schedule. Hatifa, who had been out language teacher, left. Raisa, our phonetics teacher, has taken over groups three and four for a mix of language and phonetics and has moved to Hatifa’s time slot. In Raisa’s time slot, is now Russian Culture. Culture class will include learning about history, literature and common stereotypes and whether or not they are true. According to Boris Valereeovich, Russians’ believe, that Americans’ believe, that is covered in snow and ice and that there are bears in the streets. So, admit it, how many people thought that when I said I was going to ?

He also told the story of why the Wise, chose Eastern Orthodoxy over Islam for the Russian confession. The reason behind his decision lies not with which religion he actually preferred, which was Islam due the ability to have multiply wives, but because Russians love to drink and can’t live without it ("Руси есть веселие пить, не может без того быть") and therefore could not follow Islam. 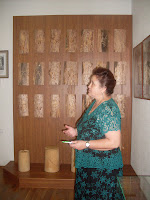 Today, we visited, the of the . The first half, was led by a gentleman who went over all the different environs that Bashkortostan possesses before we were transferred to a woman who would tell us about the different nationalities who lived in Bashkortostan. Can you say whiplash? You could tell she loved her job but it was like trying to keep up with a tornado. “Turn your attention here, now turn your attention here.” I am physically and linguistically exhausted, I hope this leads to a good night sleep.