We have hit the halfway point of our program, do I dance, or do I pout? 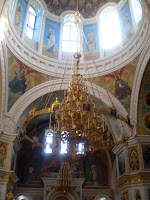 Friday was interesting, but I could have done without the non air-conditioned bus rides from place to place. Anyways, our excursion was a tour of the major religious places in . We visited two mosques and an Orthodox church. All three, were very beautiful and I was grateful for the opportunity to go inside, because I’ve never been in a Mosque before. 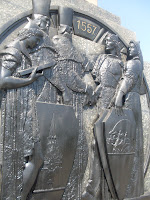 Bashkortostan, the Republic where is located, is a very multi-ethnic, multi-cultural area. The primary nationalities are Russians, Tatars and Bashkirs, but there are over 30 other nationalities that call this region home each with there own culture and religion. In 2007, Bashkortostan celebrated its 450th year as a part of .

One of the hardest cultural differences I’ve run up against is how women, under the age of about twenty five, dress. If you haven’t witnessed it before, it’s shocking. Short skirts, tight clothes and heels, and not just any heels, but stilettos. I am impressed women can walk on the uneven surfaces as gracefully as they do. I saw one woman, earlier this week, with a bandage wrapped around her knee still walking in heels. This isn’t just a summer fashion either. When I spent the fall and winter in , I saw more ridiculous high heeled, and stiletto boots than I can count. Now the funny thing is that Russian men are very rarely as good looking as the women. I’m not saying there are not good looking Russian men, because there are, but their numbers are not proportional to the good looking women.

A few weeks back, I had to deal with a bus driver who spent the entire ride flirting with me. It was partially my fault since I caught the bus going the wrong direction and so when the bus reached the last bus he wanted to know why I was still on it. I’ve managed to avoid catching the same bus for about three weeks. I was not so lucky last night. It wouldn’t have been so bad if I was not dressed up for a jazz club where a birthday party was being held. This was one of the few times I could have passed for a Russian. I was in a dress that I refer to as “short and tight.” He leered at me… leered, stared and nearly crashed the bus. Why did I have to run into him? I did however, manage to get a free ride out of it. But from now on “short and tight” will remain in my case until I return home.