Mud: Good For the Russian Soul 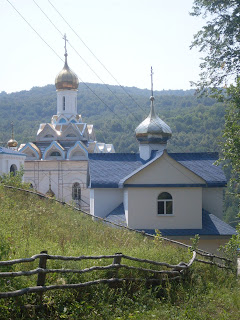 Yesterday was another all day excursion and I must say this one went off better than last weeks. It was another early morning but thankfully there was hot water and it did wake me up. We met at second campus at 8:50 am and were piled on to a bus. The guide, Artem, decided to have us play games again for the first thirty minutes before they put on “Meet the Parents,” in English and left us alone. The ride was two and a half hours long and I got very motion sick. It was too hot and Russian roads are not well maintained. We stopped at the camp sight but Artem kept talking, I was about ready to tackle him to get to the moving air outside but he made it unnecessary when five minutes later he finished and I sprinted to the front and out the door. Ten minutes in fresh air and I felt much better.

After the caves last week I was expecting something similarly rural. However, this time there were hundreds of people. Красноусольск (Kracnosolck) is a health spa, similar to what Bath, England was for the ancient Romans. You could smell the sulfur from the water as people covered themselves in the dark mud in hopes of healthier and more beautiful skin. 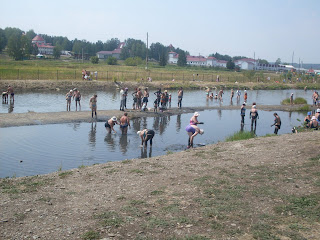 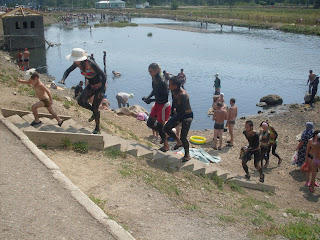 We walked up to a church that overlooked the sanitarium. It was tiny compared to others I had seen but very beautiful inside and out. Unfortunately, but understandable, we were not allowed to take photos inside the church, in part, I believe, because inside there is a very old icon. 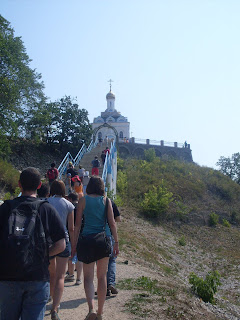 Afterwards some of our group tested out the theory about the health benefits of the water, and others walked around or just hung out. I headed back to the camp ground to eat what I had brought to eat. We had been warned that fish soup would be on the menu so I came well prepared and while everyone else sat in the baking sun eating, those of us who had already eaten spent the time in the shade.

A few of us played Durak (Дурак), a Russian card game, and then BS, an American card game. Afterwards we went to the convent on the property of the sanitarium. The nun there had actually been an English teacher prior to taking her vows and now lived full time at the convent. They gave us tea and sweets and she prayed before and after the meal.

After the convent, we returned to the bus and back to . On the ride back we watched “Meet the Fockers,” the sequel to “Meet the Parents”. It was a lot better watching it at 21 then at 13.

I walked back from second campus to Inna’s café and ate there. Artem (the boyfriend) was already there when I arrived even though I know Inna had said in his presence, at least three times, that she would be off at 11pm. He threw a hissy fit when she didn’t get off earlier than she was expected to and started calling her from just outside the building and then banging on the wheel of his car. I had to ride home alone with him, which was very uncomfortable considering he kept trying to get me to be on his side in the argument and I kept telling him it wasn’t my fight.

PS. We were in the Russian news again