The Russians are Rushing but are Getting Nowhere: A Russian Traffic Jam 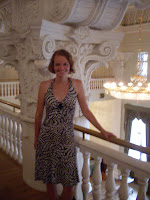 I hope everyone had a great Fourth of July! I was sorry to miss the fireworks. Instead of fireworks, we were treated to a ballet performance of Sleeping Beauty. About two weeks ago, I met my host sister’s parents, Volodya and Tanya. They are very sweet, Volodya is a senior teacher at our university, teaching US history. He bought the four of us tickets to the ballet. He also lent me a copy of Pushkin to read, so I could get the gist of the story. Unfortunately, he had mistaken Snow White and Sleeping Beauty, so I ended up reading the Russian version of Snow White. Sleeping Beauty, if you are curious, can be found in its original form in the Brothers’ Grimm. Anyways, on the Friday before Monday's ballet, the schedule came out and the entire group was scheduled to attend the ballet. Aygul ended up giving my ticket to one of the other Russian hosts, so that she could go and I could sit with Lena. Lena and I were seated in the second balcony in the center. We had a great view of the stage. The dancing was,of course, beautiful and the on stage scenery was fantastic. The only thing I could have wished for was a live orchestra, but unfortunately, it was all prerecorded music. The first part; was of course, the prologue, where the fairies come to bless the princess and the slighted fairy performs her curse. The second portion of the ballet, was the Princess Aurora at her sixteenth birthday gathering, where she pricks her finger and falling asleep for one-hundred years. The third part; follows the Prince as he meets the fairy queen, who leads him to the Princess. Sorry, no fight scene with a dragon, the evil fairy simply disappears (off stage) in a puff of smoke when the Prince kisses the princess. Then came, for me, the most tedious part of the ballet, for the next half hour, everyone who had not gotten to dance, danced, and it had nothing to do with the plot. Finally, after all the intermediate dancing, we finally saw the Prince and Princess get married. 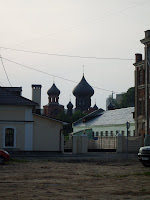 Tuesday evening, after the lecture, Michael, one of the boys in the fourth group, and I, went to Dr. Livingston’s apartment, to await an interview for a scholarship. Three hours later, we found out Arizona had messed up the days and that we had to return on Wednesday.

So, I lied when I said I would tell you more about the Universiade. I skipped the lecture in order to study. About four, after studying in the library, we headed back to Dr. Livingston’s place with a couple of our ROTC boys. We were finally able to complete the interview. How it went, I do not know, but I guess I will find out soon enough. 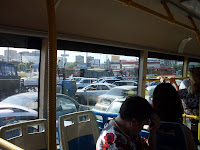 Thursday was a meeting with the heads of the university and the press was there. Thankfully, we had some brave students who gave speeches. After the speeches the presidents gave us all the traditional Tatari hats and took several PR photos. Afterwards, I caught the bus to get back to the apartment. We had had problems with electricity all day. Even our meeting with the heads of the university was affected, we lost power before it began. We were about half way home when we got stuck in a traffic jam at a stop light. The light was not working and instead of treating it like a four way stop, no one would give an inch. Which meant, no one could move, because everyone was in everyone else’s way. I took a picture. It took us thirty minutes to drive two-hundred feet. We finally got out of the traffic jam and I finally got home to study for my Friday test. On the way home today, they had traffic cops controlling the traffic at the same light.

Tomorrow, we are headed to a monastery, Lena is coming with us. It is suppose to be absolutely beautiful, and I'm sure I will take many pictures. 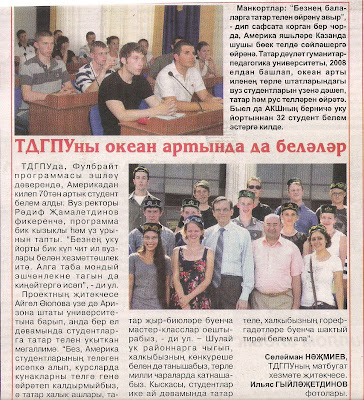 P.S. A few days after my original blog post, we discover that we had been on the front page of the Tatar news paper. That is me, front and second from the left.
Posted by Holly at 7:58 AM