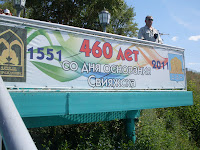 Yesterday, we traveled to Sviyazhsk. This island town, in its rich history, has been a monastery, a GULAG, a psychiatric hospital, an orphanage, a correctional school and again, after its re- consecration by Patriarch Alexei II, a monastery. The town was founded on May 24th 1551, by Ivan the Terrible, in his quest to defeat the Khanate of Kazan’. The original structures were wooden; they were build up river, numbered, disassembled, and transported down the Volga, in great secrecy, to be reassembled on the island. 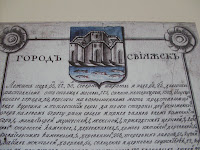 There is only one wooden structure remaining from that time, a church that is under renovation. We were lead first through one of the monasteries, which is also under reconstruction. The original structure of the church is from the time of Ivan the Terrible. That structure was covered in stone in the following centuries and an entrance hall and a porch were also added. Within the original structure, there is a fresco of the Tsar, supposedly from his lifetime. Unfortunately, we were not able to see it, because it was on the backside of a pillar and scaffolding prohibited us from getting a view. We did however get to see a fresco of St. Christopher the dog headed, or horse headed, one of three that still exist in Russia. 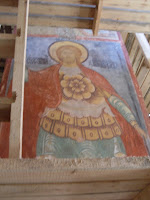 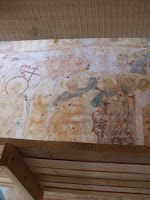 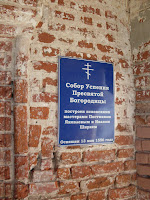 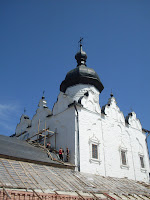 Our guide then led us to the part of the island that had been the guard’s barracks and the administrative center, during its time as a prison. Now the administration building is a three-room museum of photographs and some artifacts. They had pictures of some of the other churches that had once existed but were blown up by the Soviets. For me, I loved the four-hundred plus year old book. The book had once been a part of library of St. German, the monk who founded the monastery. Second best thing in the museum, the fact it had a toilet with toilet paper and soap. Oh, the simple joys in life. 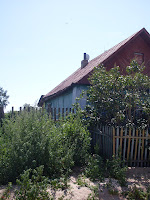 Let me tell you a little about the island's population. It is home to a about two hundred people. They are currently building new houses for many of the people on the island to replace the old dilapidated wooden cottages and crumbling brick structures. I am sure the upgrade will be appreciated, but I am sad that the older buildings will be destroyed. They have this simple charm about them.

We continued around to the other side of the island, where we visited the other monastery. It is in this cluster of buildings where the only completely wooden structure from the time of Ivan the Terrible still exists. The wooden church was closed to visitors, but apparently most of the icons that were there are now in the museum I visited last Sunday with Masha. We went inside the only church that preforms regular services. The most religiously important artifact in the church is the reliquary with the remains of St. German, the monk who founded the monastery. All the other icons within the church are copies. 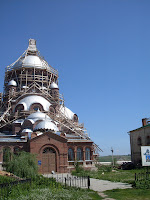 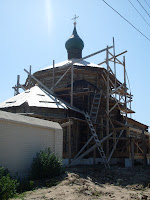 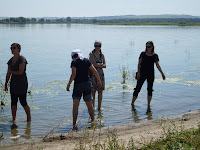 After the tour, we ate lunch and a few of our students went swimming in the river, before we got off the bus and returned to Kazan’.

Saturday night, I finally was able to watch Harry Potter. It was fully dubbed in Russian, but between having read the book and my understanding of Russian, I was able to comprehend most of the film. I loved it, and cannot wait to see it again, in English.

Today, I woke up early, despite my best efforts to sleep in and studied for several hours. Then Lena and I went to the Zoo with Ira. I had guessed that I was not going to like what I saw, and I was right. I suppose that I have been spoiled by the American concept of zoos and the humane treatment of animals, but it was heartbreaking for me to see the animals in their tiny cages and enclosures. I left with a bad taste in my mouth.

I do not know when I will update next. Next Friday, when I would usually update my blog, I will be taking a ten-hour bus trip to Ufa for our free weekend.