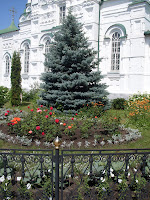 Today, as I promised in yesterday’s blog, we went to the Raifa Monastery. It was about an hour bus ride from the center of the city. Lena joined us for the excursion. The monastery is located in the country near a beautiful lake. When we arrived, one of the monks from the monastery greeted us. Our guide was dressed in the traditional long black robes and he led us around the monastery explaining the history, with Dr. Livingston translating. Monks have lived in the area since the Time of Troubles, but the existing monastery was built only in the eighteenth and nineteenth centuries. It has been under reconstruction since the end of Soviet power, when it was heavily neglected. There are two churches, which are open to the public. The first that we went into was the Church of the Georgian Mother of God, so named for the icon which is located in there. The icon is actually a 19th century copy of the Icon of the Georgian Mother of God, but is considered a miracle-working icon in its own right. It is believed to have healed the sight and hearing of those who stood near it on the day it was brought by procession to the church. There are two other miracle-working icons in the church, but the Georgian mother of God is the most famous. The church, itself, is not painted in the traditional orthodox style. The inside, including the iconostas, was repainted after the end of the soviet period and looks more Italian in style. 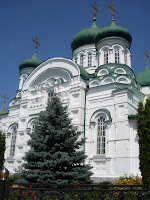 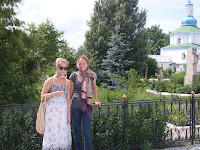 We exited the church and continued around the compound, stopping in front of the dormitories of the monks. The dormitories also house the library, but our monk guide told us it is rarely used because the monks use the internet and the computer to access old texts. 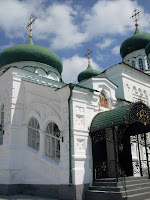 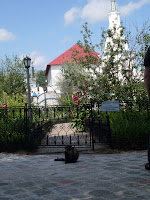 We were then led to the orphanage. The children who are educated there are both orphans and children from poor families and only three had joined the monks after leaving. They receive both a tradition and a spiritual education. The children were gone for the summer, either to relatives or to summer camps in the country. We continued around to see the blessed spring, housed in a little chapel and then into the second church. There a four-monk choir preformed for us. Dr. Livingston said that in the nine times he has been to Russia, he has never experienced anything like it. He told us that we had received a great honor. 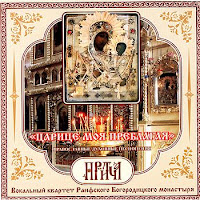 The music was beautiful and it was sung in a church with great acoustics and a ten-second echo. When the church was originally built, you could hear monks chanting for kilometers, but it has had a seventy percent reduction in acoustics since its reconstruction and renovation. I bought the CD and you can find the songs on i-Tunes under “Pritcha.”

Afterwards we visited the lake and were allowed to wander the compound. I looked over some of the pictures by local artists and purchased one. I hope you like it mamichka. 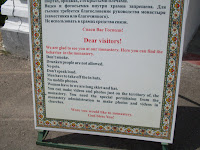 We left the monastery at one and Lena and I were dropped off earlier, closer to home. We returned to the apartment by two and I sat on my bed studying and fell asleep with my notecards in my hands. I woke two hours later to a thunderstorm and remembered four words that had been giving me trouble in my memorization all day. Funny, how that works.

Apparently, Russian has infiltrated my subconscious mind. Lena told me that she heard me speaking in Russian in my sleep the other night.