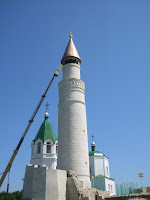 Today was the excursion to Bolgar, an ancient city on the banks of the Volga River. We, the program participants, met outside the main campus of our university at 8:50 am. It was already sweltering. Thankfully, the bus that was arranged for us was one with air conditioning. We drove through Kazan’, passing through a lot of construction associated with the 2013 Universiade. I will go into more detail on the Universiade on next week’s blog post; we are getting a lecture on it, on Tuesday. 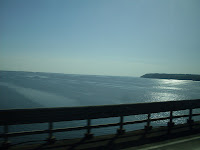 As we were driving out of the city of Kazan’, our bus was pulled over by the cops and the driver had to present his paperwork. I guess everything was in order, because we were on our way in about fifteen minutes. The rest of the drive was uneventful, as we drove through rural Russia. I was, however, able to grasp the enormity of the River Volga, as we passed by and over it. It is one of the longest rivers in Europe and I would not be surprised if it was also one of the widest.

We arrived in Bolgar and exited the bus. We headed inside the gated area and had a ten minute restroom break. The toilet was a “cultural experience” and was not for the modest or the particularly faint of heart. Unfortunately, I am accustomed to worse in Russia, though a door would have been nice. After everyone had made their necessary pit stops, we met with a guide who showed us around the sights, with Dr. Livingston translating. Our first stop was the archeological museum, housed in a former Orthodox Church of the eighteenth century. The one of the exhibits was remains of a pagan burial, the bones of a woman and the cloth and metal belt that she had been buried with. There were also several examples of pottery and weaponry have also been excavated on the site. 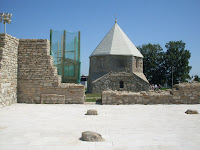 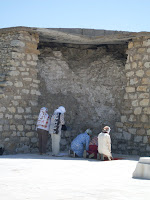 Bolgar is famous, because it was there that Islam was first accepted and practiced in Russia. It is a holy center, which serves as a gathering place for Muslims every year on the anniversary of the foundation. After leaving the museum, we entered a mausoleum; there are many of these on the site. This particular one displayed tombstones of ancient inhabitants. Another, showed an open pit, where two stone caskets still stood. After investigating the tombstones, we walked to the foundation of the mosque, that once stood there. The big minaret, next to the mosque’s foundation, is in the process of being restored. The foundation of the mosque is still a place of worship, and while we were there, we witnessed several Muslims at prayer. 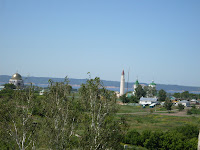 Our guide led us further across the site to the small minaret, which we were allowed to climb the forty-four steps in groups of three. It was a tight fit, because the only view from the top was a single doorway and a tiny platform. It required some maneuvering for each of us to look out the window in turn. While different members of our group took their turn, we waited. Some of the group was smart enough not listen when we were told to leave our lunches on the bus. I was not one of them. In the shade of the small minaret, some of our group ate and the rest of us enjoyed the shade.

Bolgar, also has several ruins of bathhouses. The Bolgars had a system of pipes that would run through channels under the floor of the bathhouses, through them ran water hot enough that the ancient Bolgars had to wear sandals in the bathhouse. The guide also explained that the bathhouse was a place for women to relax all day and get away from their husbands.

From the bathhouse, we had one more stop, to the black “palace,” there the guide told us the legend of the name. During ancient times, a prince and his family were holed up in the building by the advances of an invading force. The leader of the invading force ordered that wood be placed around the building and it to be burned. We on top of the building a woman dressed in white appeared. The leader was so astounded by her beauty, he asked for her hand in marriage. She agreed on the condition that her brother be release. As her brother rode away, she three herself on to the fire, and died. Our guide stressed that this was a legend and that most likely the building was a mosque, an Islamic school or a court. I, however, would not be surprised if a similar incident did happen, legend is sometimes an exaggeration of historical events.

After the tour, we returned the bus and the rest of us hungry souls ate. Lena had made me blini and cheese the night before, and I had bought cookies. After lunch, we got back on the bus and returned to Kazan’.

I would like to wish everyone a Happy Independence Day. This will be the second Independence Day that I will spend in Russia. This time, we are going to the ballet, and yes, we must still attend class.