It All Ends: The First Half 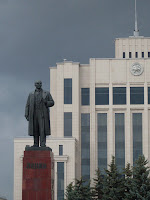 We have now reached the halfway point of our program. Four intense weeks have flown by with still another four to come.

This week, I must confess will sound somewhat boring. I blame it on the fact that it was midterm week and the majority of my time was spent in review.

On Sunday, I went out an art museum with Masha. It was rainy and miserable and I looked rather like a drowned cat by the time she arrived. The museum had a large collection of older Russian icons and strangely, enough, an exhibition on antique fans. Speaking of fans, I bought one and felt like such a tourist doing so. I am now the proud owner of a fan with pictures of Kazan’s major landmarks that I pull out every time it gets too hot and stuffy, especially on the bus. It is probably a dead giveaway that I am a foreigner.

Monday after class, my professor, Gulnaz gave us a lecture on tourism in Russia, followed by a Jeopardy style game, which my group spectacularly…lost. 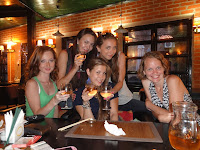 Monday, was also Lena's birthday. Birthdays in Russia are huge, lasting several hours, with continuous flow of food and drinks. We ate at this little restaurant off Balman Street. There were eight of us, six of them went through three bottles of champagne, only Susha and I abstained. Gifts were, of course, exchanged, everyone knows of Lena’s love for earrings so she received several pairs. It is also tradition for the guests to deliver a toast to the birthday girl or boy; I even gave a small one. After my toast, Lena’s friends asked what we Americans say when we clink glasses. I honestly could not remember anything but “cheers,” and that is kind of boring, so I taught them how to say “cheers” in Welsh. From then on, after every toast when we went to clink glasses, they said “Iechyd da.” While we were at the restaurant, four Americans showed up, and they did not know a lick of Russian, so guess who ended up helping them to order. They were very friendly and were only planing to be in Kazan’ for a few days on business, something US government related. I figured it was probably “need to know,” so I did not ask questions. Our Russian girls found them very interesting, and later that night; they all ended up together at Coyote Ugly. I, also, made a brief pit-stop at Coyote Ugly for about fifteen minutes. Long enough to watch Lena danced on the bar top. Afterwards, one of Lena’s friends, Susha drove me home. 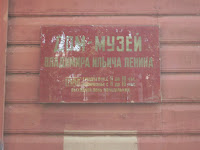 Tuesday, was a tour of house Lenin’s family rented when they lived in Kazan’. They resided there for a grand total of nine months. Lenin and his family, the Ulyanovs moved to Kazan’ after the execution of Lenin's older brother for revolutionary activities.

Lenin, himself, attended Kazan State University for a time before being expelled for, can you guess, revolutionary activities. Funnily enough, Kazan State University was later named in his honor. It is always interesting visiting these houses, because of the portrayal of Lenin. He is still very much a revered figure here in Russia. As the guide was showing us picture of the Ulyanov family, she gave them each a glowing reviews, and told how each of them 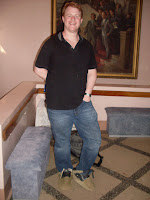 either wanted to be just like Lenin, or wanted to helped him in his revolutionary work. The portion of the house rented by the family was small. It was Lenin, his mother, sisters and brother, who resided there, subsiding off his father’s death pension. The rooms were decorated according to the memories of the two youngest Ulyanov children, with a few personal effects of the family. Lenin’s room was down stairs with a door to the outside, for going to and returning from secret meetings, according to the guide. Oh… and I nearly forgot, the shoe coverings to protect the floors. Do they not look just fabulous? 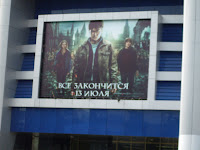 I spent Wednesday and Thursday studying, while some of the others went to see Harry Potter. Yes, it came out here on Wednesday causing a major internal struggle between the “I want to see Harry Potter before my friends at home” side and the “you have a midterm, so study” side. I guess you can figure out which side won. I am going to Harry Potter tomorrow with Lena and Ira. 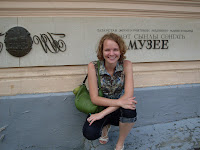 We are also headed to Sviyazhsk tomorrow. It is a town that was built during the reign of Ivan the Terrible. I will let you know how that goes.