A quick recap of the week: 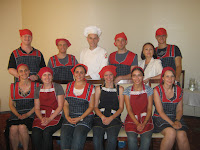 Tuesday,ten of us, went to a Tatar-Russian cooking class with a master chef at a three star hotel. We make trigolniki, a three corner pastries, a rabbit dish, salad, a dish of chicken stuffed with prunes and wrapped in bacon and a fish dish. We were all encouraged to take part in the cooking and then afterwards were given the chance to try it.

Here is a YouTube video of our Master class. http://www.youtube.com/watch?v=OusYXseL330

Wednesday, I met up with Masha and we wandered the city for a good couple of hours. We walked up Balmana, to a wax museum, to the Kremlin and then back down. It was fun, she is sweet and I am going to miss her when I go home

Thursday was my usual studying and Friday was my exam and a free afternoon. 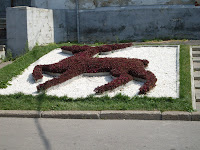 Our excursion, this weekend, was a full weekend excursion to the city of Nizhnii Novgorod and the village of Boldino.

We met the bus at five-fifty, Saturday morning in the center of the city. This required a taxi; since I was not willing to risk missing the tour by trying to catch a bus that may, or may not, arrive. We met up at the mall, in the center of the city, but did not leave for nearly an hour due to late-comers. The first bus ride, was was about five hours long. I slept a good portion of it, and woke up in time for us to arrive at Nizhnii Novgorod. We picked up our tour-guide at a bus stop, and she directed us to the café where we ate lunch. After lunch, we headed to the Kremlin, like the Kremlins in Moscow and Kazan’, this Kremlin was a walled in area built for defense and it has several large towers around its perimeter. It was Saturday and the weather was beautiful, and we kept running into wedding parties. It is traditional for the newlyweds and their family and friends to have their photos taken at places of importance. We probably saw twenty different wedding parties. 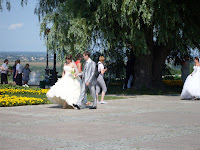 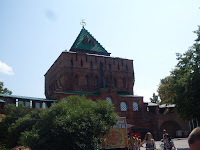 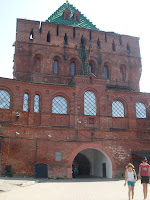 Within the Kremlin walls, our tour guide lead us around, telling us the history of the Kremlin, which has existed since the fifteen hundreds. The Kremlin is now home to the government of the Nizhnii Novgorod Oblast and we passed some of the more modern building that housed some of the administrative bodies. It also has an exhibition of famous Soviet artillery from World War II, our ROTC students had a blast with those. We also visited a church within the confines of Kremlin. There had once been more churches. If I recall and translated the words of the guide correctly, there had been ten churches and three or four monasteries in the Kremlin. Unfortunately, many were blown up or destroyed under Soviet rule. 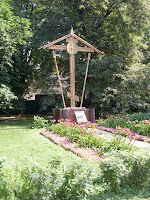 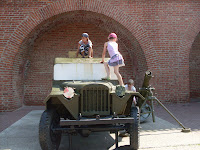 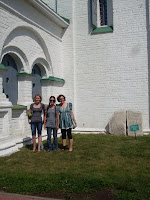 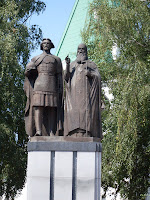 We also visited the eternal flame, lit in honor of those who fought in the Second World War. It is also traditional for newlyweds to lay flowers before it (picture). Our tour guide was “go, go, go,” the entire time and after giving us only a few minutes to souvenir shop we left. Unfortunately, we also left some of our new three weekers. 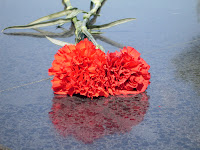 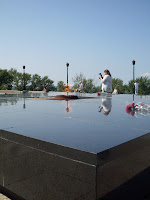 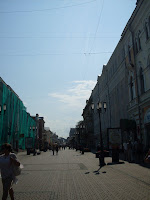 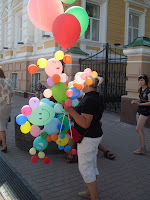 Our tour guide hustled us down a pedestrian street, with shops on both sides, quickly telling us the history of some of the buildings, before declaring that part of our tour was over. That is when we discovered our missing three weekers, they were still at the Kremlin. We went back and retrieved them before continuing a bus tour of the city.

We stopped by this truly magnificent cathedral, built by the Stroganoff family. It’s cupalas were reminiscent of those of those that crown St. Basils in Moscow. After the church we visited the home of Gorky, the famous writer. That was another quick tour before we were back on the bus for another four-hour drive to the village of Boldino. 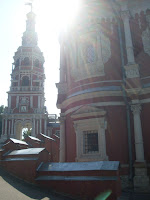 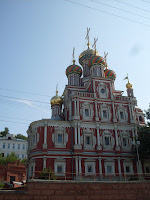 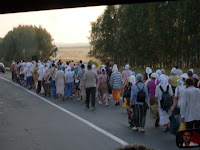 We dropped off the tour guide and had a pit stop at McDonalds. Most people got something to eat, I was silly enough not to, thinking, “Hey, we’ll be stopping soon for dinner.” Here begins our “TIR: This Is Russia” experience, we file back on to bus and begin our drive to the village, an hour or so into it, Dr. Livingston announces that, since we were running late, we will no longer be able to eat at the planned stop and that we would eat at the hotel. Okay, we can handle that. So the Russian boy, who has been arranging things for us, calls the hotel. We find out, that there is only a single cook, so we need to figure out one meal that he can make it in bulk. We decided on chicken, they call the hotel back, only to be informed there is not any meat. So what is there to eat? Salad, blini and eggs. With dinner settled and our bus contining down the road, we pass a religious procession and cows in the road, and then are stopped by the police. They inform the bus driver that the road further down closed and we needed to make a detour. So, our bus turns around and head back the direction we came, we pass the religious procession. We retraced our steps for about thirty or forty minutes. We then turn down another road, and continue towards Boldino. I do not know much of what happened during the rest of the drive, except that I woke up once to the bus drivers discussing whether the GPS was right or not. We arrived at the hotel in Boldino about eleven-thirty, two and a half hours later than expected. Mary Helen, Rachel and I, investigated our room and left our stuff inside and headed to the restaurant for our much-anticipated dinner. After dinner, we headed back and Rachel tried to take a shower. Our room did not have enough water pressure to run the shower, so we ended up using washrags and the sink facet to clean up. The three of us headed to bed about half twelve and slept soundly.

What can you do in these situations but shrug, laugh and say, “this is Russia?” If you cannot do that, Russia is not the place for you. 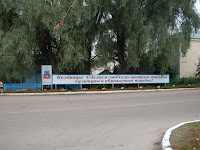 The next morning, we got our first look at Boldino. It is small and it is fame is derived from the fact that Pushkin lived there for a few months, twice, and wrote about fifty pieces of writing. More, our tour guide proudly told us, than any other period in his life. From what I understood, the Pushkin family owned the property as well as a thousand serfs on a large plot of land that surround the house. I was in the first tour group, we made our way through the museum house and its exhibits and then around the garden and the wooden structures on it. These included the “office,” where grain scales were kept, the banya, the stables and a small house where each room held a Pushkin fairy tale. The grounds were beautiful, my group finished first, so we wandered for an hour waiting for the second group to finish. 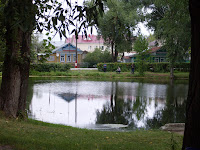 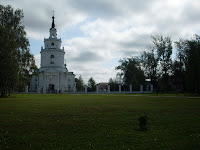 During the down time, I was able to get to know some of the three weekers. They had completed their first eight weeks of Russian, ever, in Tempe and are now in Kazan for our final three weeks. When the second group, caught up with us, we headed back to the hotel, bought some provision for the ride and headed back to Kazan’.

There was one more TIR moment. “The green toilet;” our rest stops consisted of us pulling to the side of the road, going behind a structure to do our business, the girls on one side of the road, the boys on the other. Our bus arrived in Kazan’ about eight-thirty in the evening, just in time for me to catch one of the last buses, to my part of the city.

If I could have had it my way, we would have spent the entire weekend in Nizhnii Novgorod instead of the five or six-hour whirlwind tour that we did. I would have like to have been able to investigate the city more thoroughly and spent more time in the Kremlin, visiting the museum we skipped.

It is now August, and only two weeks left in the program. As much as I love Russia, and anyone who knows me, knows how much, I am ready to go home, see my family and friends and enjoy some American consistency.