Our program is winding down, with just one week, one presentation and one exam left to go. 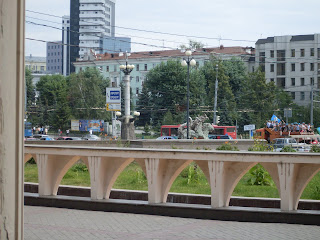 Tuesday was a holiday, honoring the airborne division of the Russian army. According to our professor, the members of the VDV always gets in to mischief on this day, sometimes swimming in the fountains but always getting loud and obnoxious. She also said, that we are lucky that we are living in Kazan’, in Moscow and Petersburg, this day is downright dangerous, especially for foreigner and for those who look like they hail from the Caucasus. We saw one example; our university is located on the corner of a major part the city, from our class we heard yelling and looked out to see the VDV causing a traffic jam. There was a convoy of cars, from which they were hanging out the windows waving flags. There were also about twenty or thirty standing in the back of a dump truck yelling and waving their flag. Look on the right hand side of the picture, you can see the people in the back of the dump truck, waving a blue flag.

On Tuesday, we also visited the National Museum of the Republic of Tatarstan, located near the Kremlin. This was also the first museum that I did not spend half my time staring at my watch. The museum had exhibits ranging from beginning of human colonization of this land, up through the Second World War. The museum housed exhibits of artifacts from Bolgar, as well as other ancient sites. As we continued through, we saw also saw exhibitions of icons and religious texts written in Old Church Slavonic. The museum also held royal items from the time of the Romanovs and exhibits of Kazan’s role in the Second World War, and illustrations of how people lived. Most poignant were the pictures drawn by children of bombs and planes. 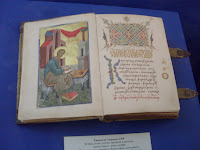 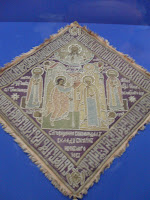 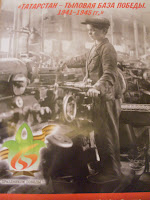 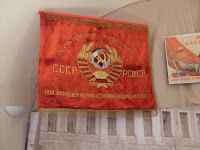 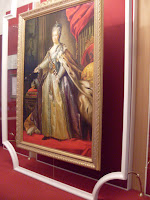 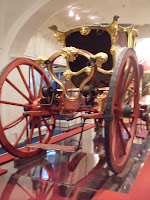 My favorite exhibit was a golden stage coach, a gift from Catherine the great, who visited Kazan’ in 1767.

Thursday, in class, we watched the film “Moscow Doesn’t Believe in Tears.” It was the first time I had seen the film in its entirety and I enjoyed it immensely.

Today, we had a painting class. The class illustrated the technics for painting such items as matryoshka dolls (the famous Russian nesting dolls), and the red, black and gold lacquered spoons. I painted a spoon, a poor imitation of the original, but fun, none the less. However, I did learn that we have some very talented artists in our group, including Rachel, who painted a beautiful blue, silver and white matryoshka.

Afterwards, a few of us walked along Balman Street to purchase some last minute souvenirs. I bought a few magnets and matryoshki, though these matroyshki have a Tatar twist, they are wearing the tradition Tatar hat.