My roommate is off in Kyrgyzstan for the weekend. The trip was unexpected and I didn't have a visa, so I'm home alone for the next few days.

I decided to go for a walk to Republic Square, the former seat of Government in Almaty before the capital of Kazakhstan was moved to Astana in the North. The first thing I was struck by was the lack of trees along Satpaev street. As I approached, I couldn't help but feel a little disappointed. It was just so sterile. I was only one of five people in the general vicinity of the monument at the center of Republic Square, one was guard leaning up against one of the four statues that surrounds the central spire, the others were a mother and her two young children. No street vendors, no ice cream carts, nothing. Just quiet.  Across the road, I could see three glass domes belonging to mall in the foreground of the official building. There were two entrances to the underground mall on my side of the road and I ventured down. The mall was also very sterile. There were guards on every floor and at every entrance. Only a few well dressed people milled around. Everything about it was perfect, and I hated it. I exited on the other side of the road from the monument and walked around the perfectly manicured park that decorated the foreground of the mall and the official building. I did like the variety of sculptures present in the garden and I also enjoyed looking across the road to see the words of Nazerbayev strung across the top of one of the opposing buildings "Political Stability and a Single Kazakh People are the Main Values of the State."

Republic Square is not a reflection of the Almaty that I have come to know and love. It was too clean and too perfect. Almaty for me is the Green Bazaar with people selling their wares, though I have been told that today's Green Bazaar is different from the Green Bazaar of two years ago, but for me it feels more alive and more real than the square. In addition to the Bazaar, Almaty is also the beautiful mountains, the churches and the mosques. So, while the monuments and gardens were beautiful in their own pristine way, I did not think it was representative of what I have come to associate as Almaty. 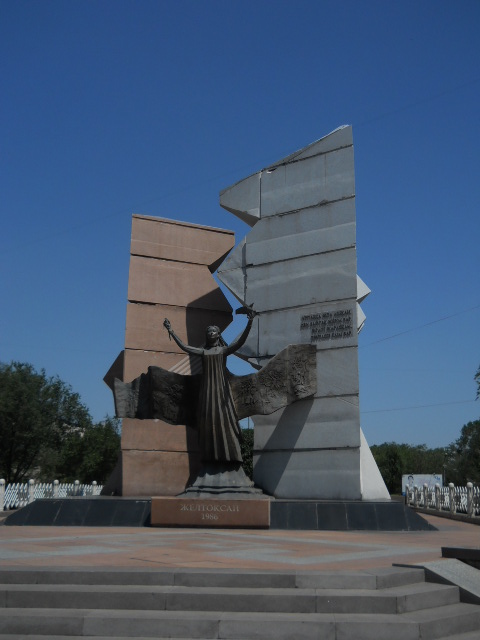 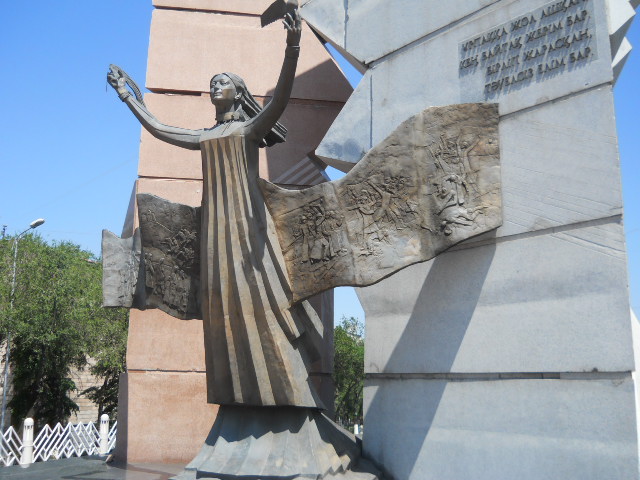 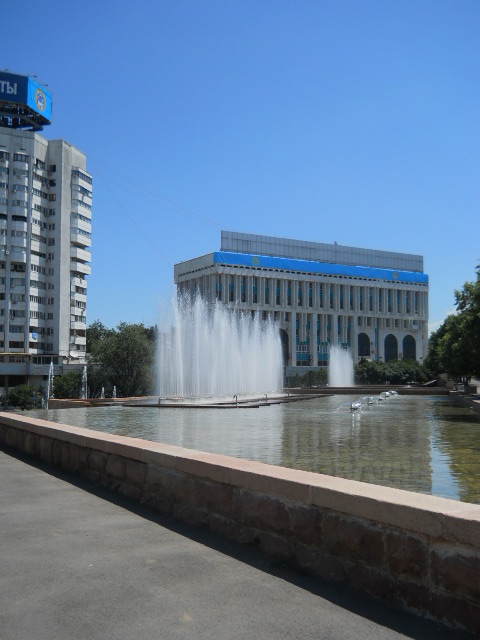 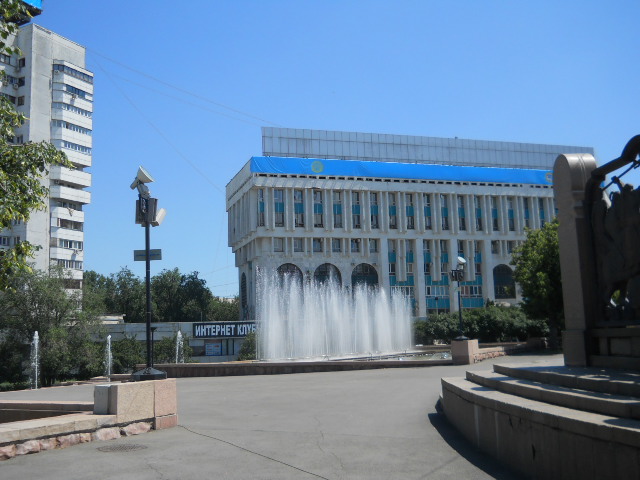 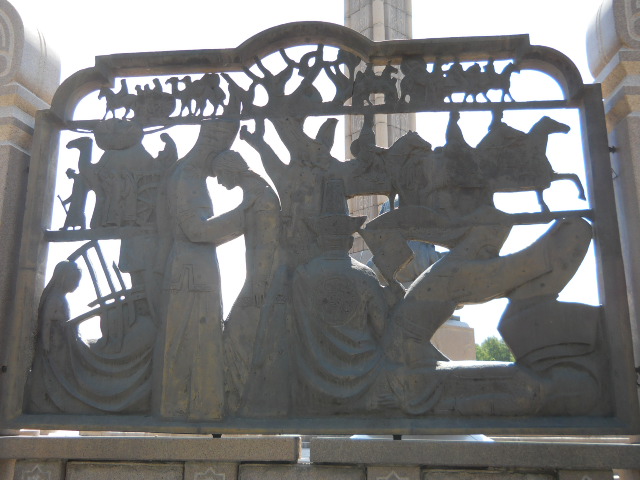 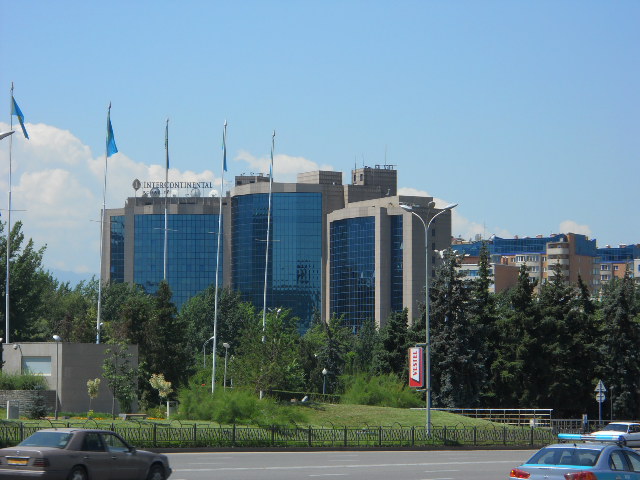 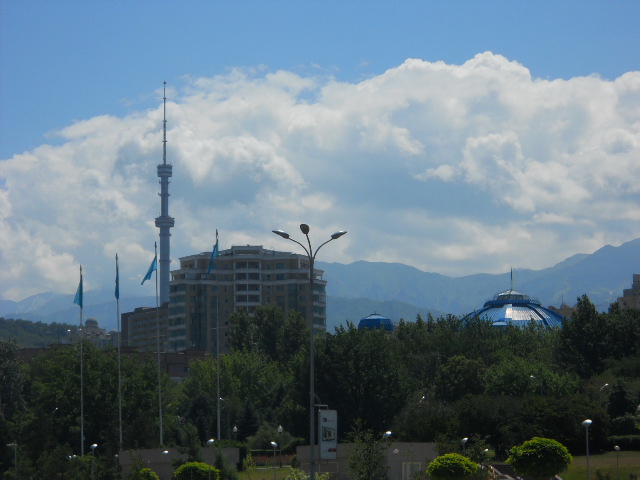 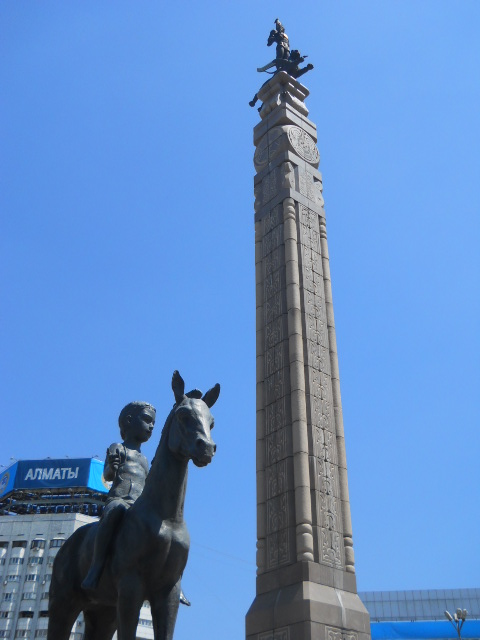 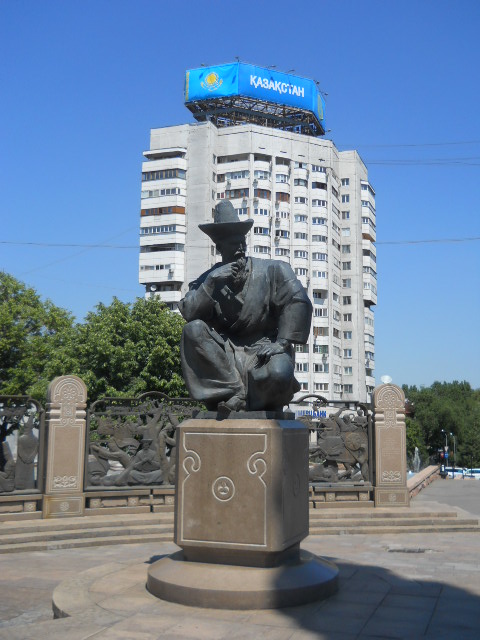 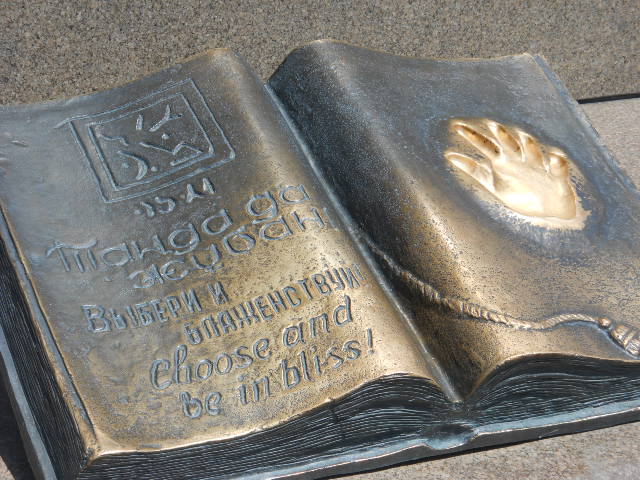 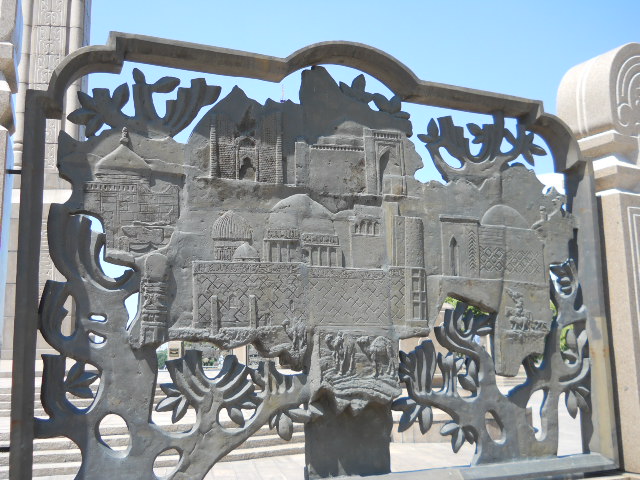 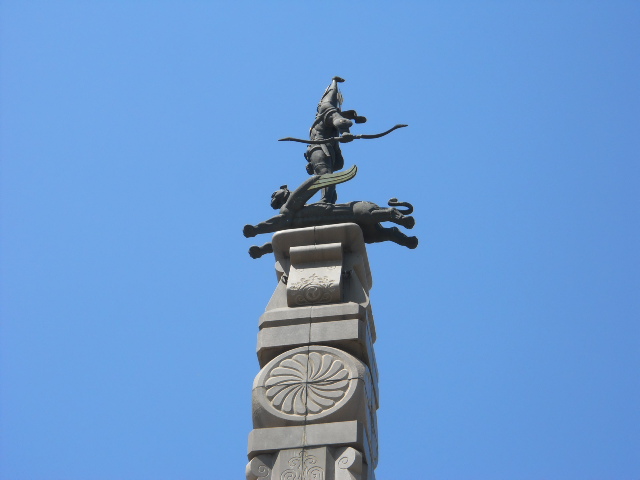 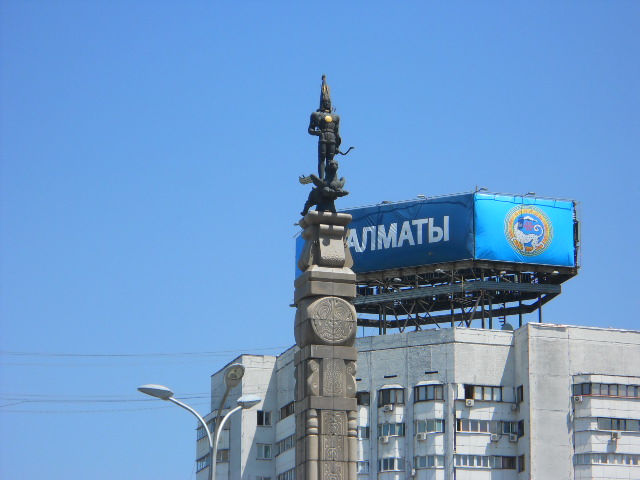 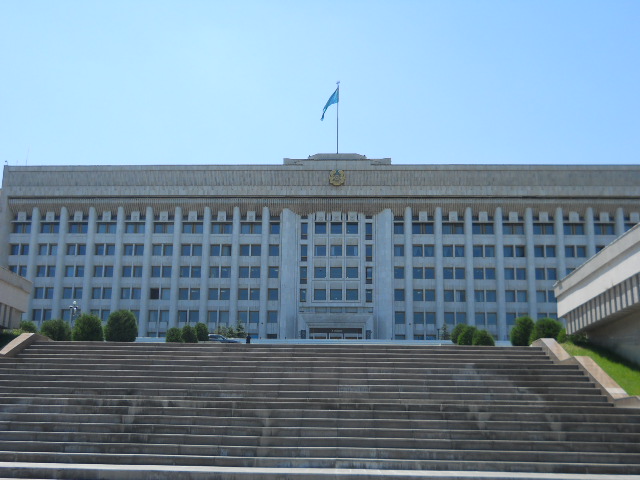 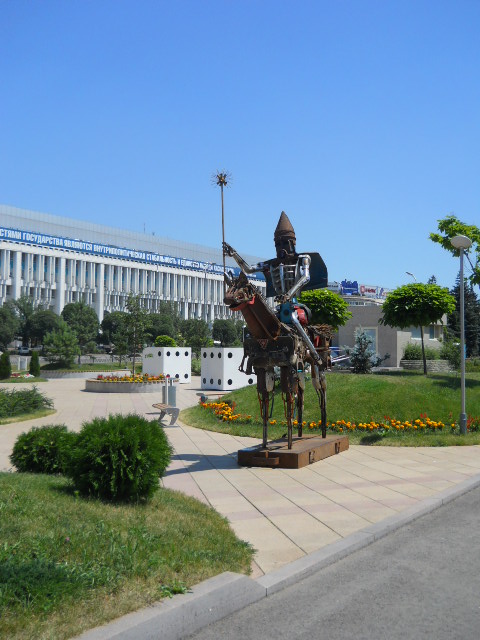 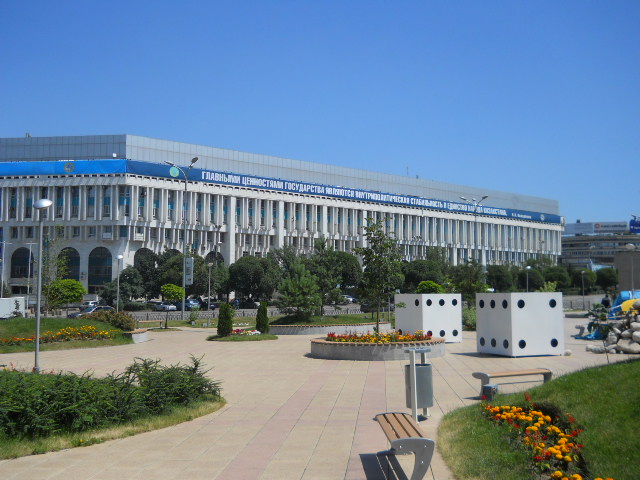 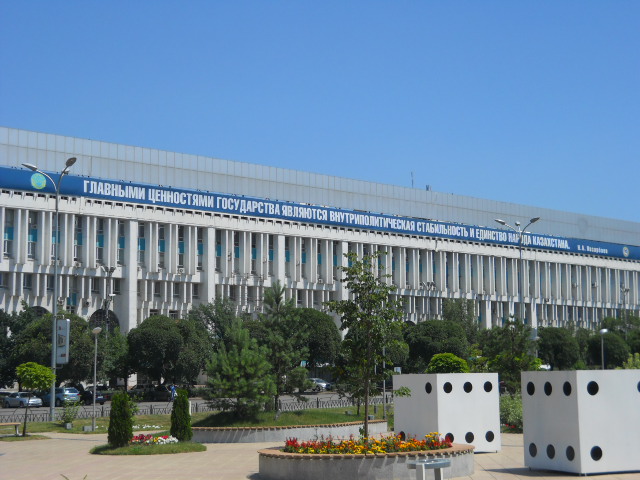 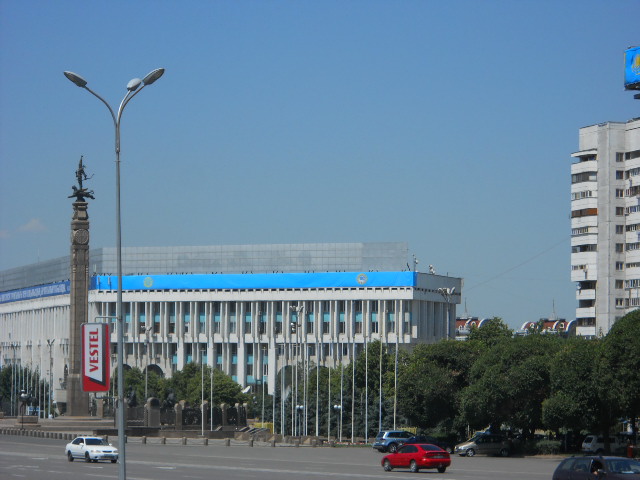 After lunch, I went out for a walk with Mariana. We walked down Abai Street and turned down one of the side streets, coincidentally the same one that the building that houses the Migration Police is on. Somehow during my search for the Migration Police, I missed the church which is not far from it. The Cathedral was our destination today, I read up about it in Lonely Planet during some down time in the office and wanted to see it for myself. It was built in 1909 and used by the Soviets as a Stable after the Revolution. Outside the church is a statue of St. Nicholas, for whom the church is dedicated. Inside the style of the painting reflects is early 20th century origins, it looks more Italian than Russian. Most of the icons seemed rather new, except for one, the Icon of the Mother of Kazan', whose painting had darkened with age. While we were looking around, I pointed out the Icon of Prince Dimitrii, the youngest son of Ivan the Terrible (Stormy). In response, Mariana told me that there was an Icon of the last Romanovs. From that I discovered that our interest in Russia stems from the same source, the movie Anastasia.

I saw the movie Anastasia for the first time between the summer of sixth and seventh grade. I had not wanted to see it when it came out because it was just another princess movie and I was too old for that, so I didn't see it until many years later. I watched the movie and was intrigued, what really happened? I was lucky enough that the following year I had a teacher who recognized my fleeting interest in Russia and I fell in love with it. The rest, they say, is history. Thank you, Mr. Sawyer.

We walked around for a little bit more before walking around the neighboring park. From there we went and got an ice cream and began walking back. We found a cherry tree on the way back and Mariana climbed it, we managed to get two cherries for our efforts, they were sour. We walked around a bit more, through two parks by the opera house, before I began my journey home. 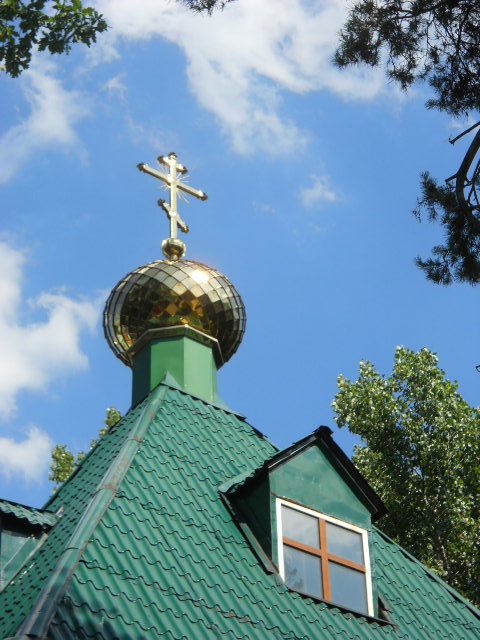 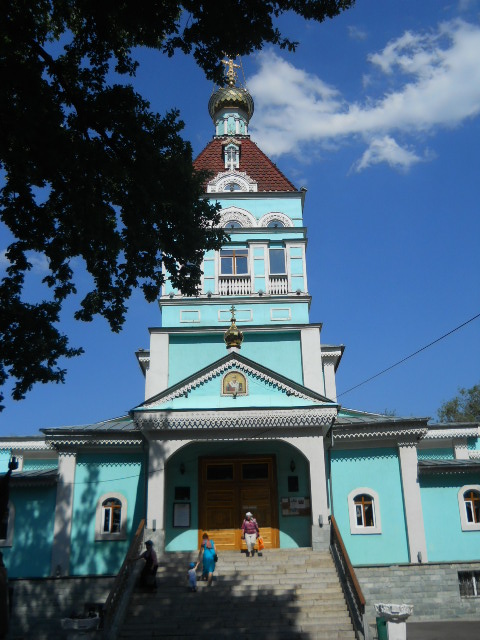 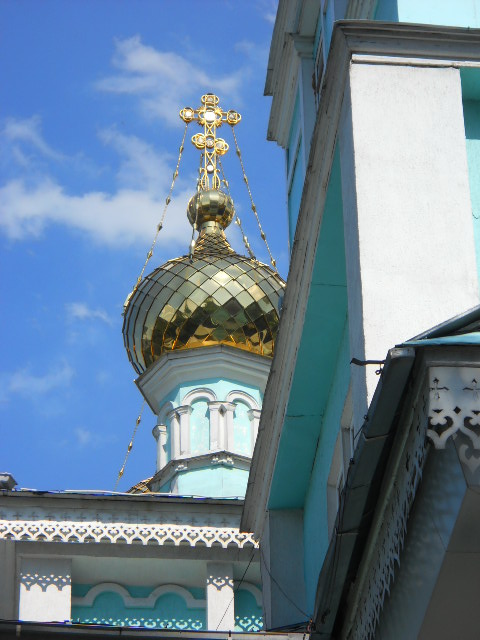 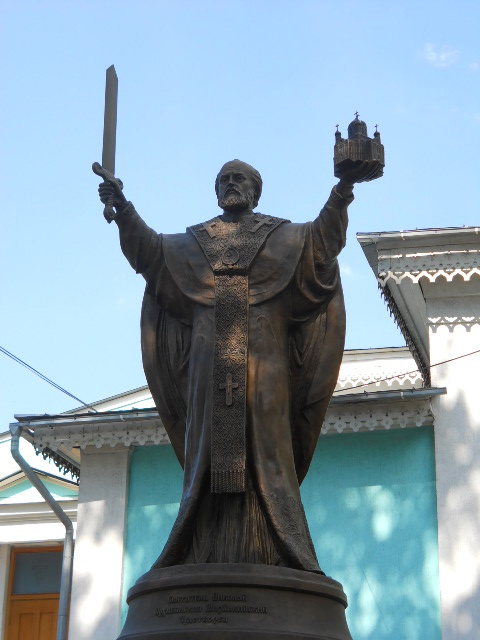 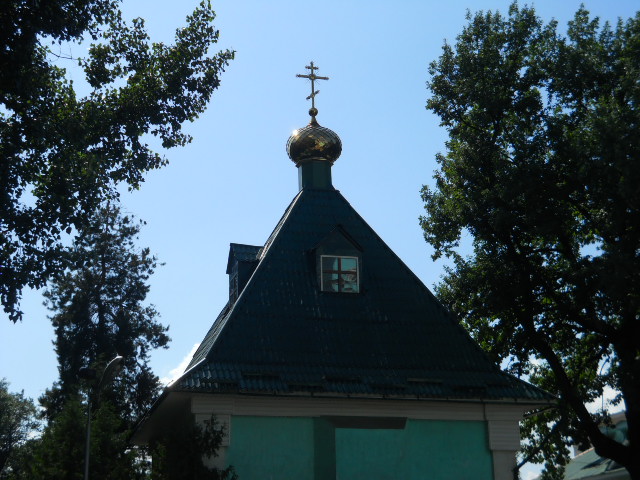