"This is a Pleasure Hike, not a Death March... That's Next Time."

I climbed a mountain today! And I made it down in one piece, mostly. I consider that a major achievement on my part.

Jessica, Antoine, Ed and I decided that we were going to hike/"trek” Medau, the mountains to south of Almaty today. I was up and at the bus stop across from the Hotel Kazakhstan before 9 am. While I still hold to may statement that Almaty is a sleepy city in the morning, this particular bus stop began to fill up early, all preparing for a day at Medeu. Once our group was complete, we crammed on the bus, the six, and headed for Medeu. The bus ride was twenty or twenty-five minutes long, but it was hot and uncomfortable. Hikers and bikers had crammed on to the bus with all their equipment, the bus attendant hardly had room to gather the fare.
We finally reached the base of the mountain and took a gondola up to the Shymbulak. The view from the gondola was extraordinary, we passed right over top the ice-skating rink, which was used during the Asian winter games and is now a basketball/soccer court. 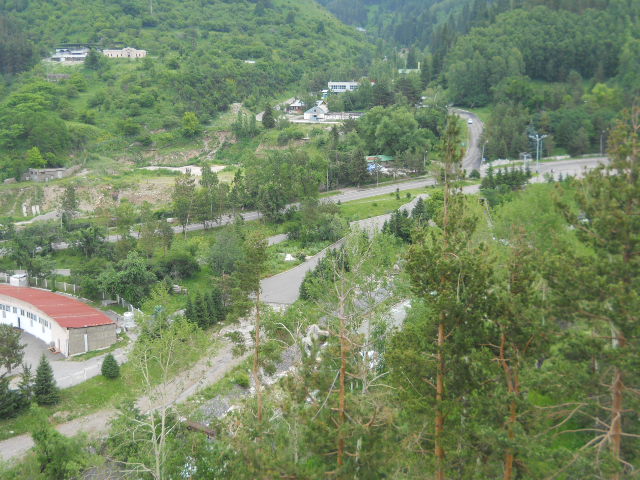 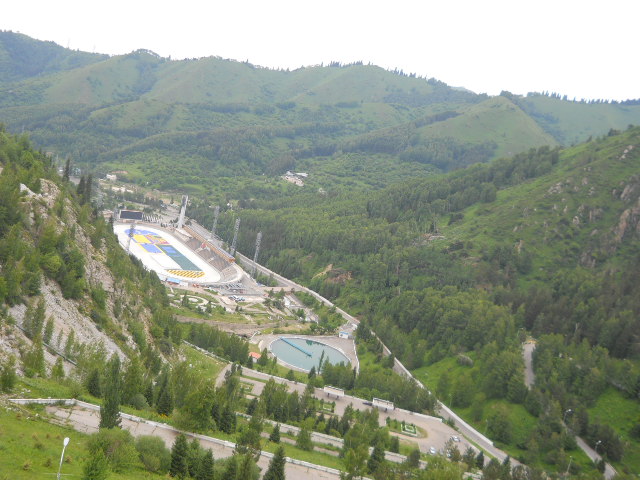 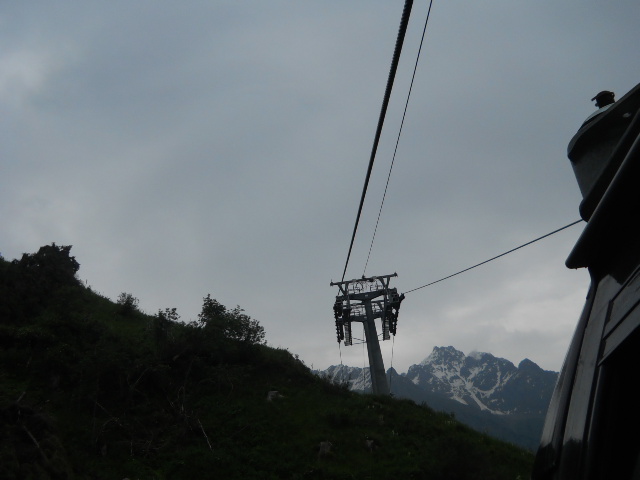 From Shymbulak, the climbing began. We climbed up from Shymbulak along a road gravel road, passed the hotel; Shymbulak is a ski resort during the winter, and up the mountains. When we came to the fork in the road, we chose the more direct but more challenging route through a dried river gorge. There we were forced to climb over larger boulders and rocks that had washed down when the gorge was filled with water. It was easier to move over the larger stones than through the small stones, which we encountered later. The small stones tend to dispurse when you stepped on them, making it very slippery. We trekked through the gorge for a couple hours, in addition to boulders; we climbed over the ruins of an old ski lift, which had obviously been thrown down there at some point instead of being trashed properly. We made it up and over the boulders and then were faced with a hill of small rocks, which felt like walking through snow. I must admit that I was the slowpoke of the group. Ed climbs mountains on a regular basis, so this must have felt like a hill; he assured me that this was in fact a pleasure hike not a death march, so I could take my sweet time. Antoine wasn’t fazed by the climb and was right behind Ed most of the time and Jessica held her own. 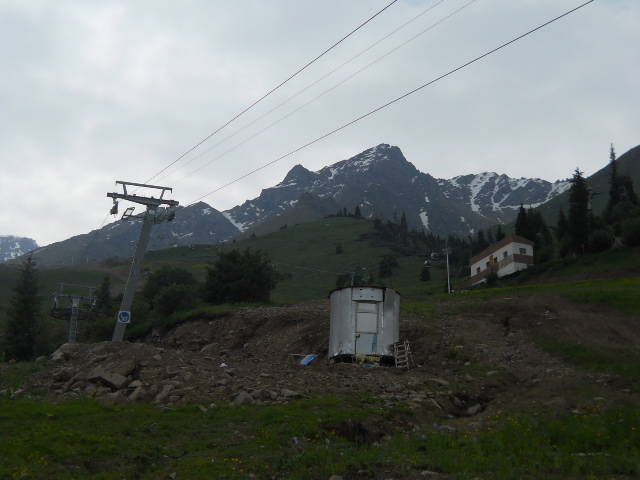 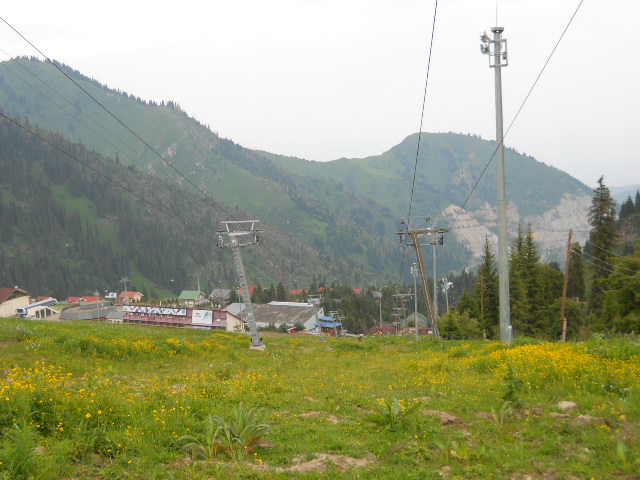 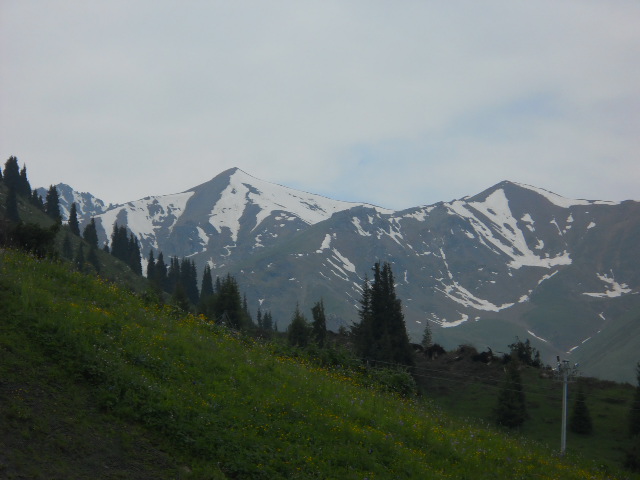 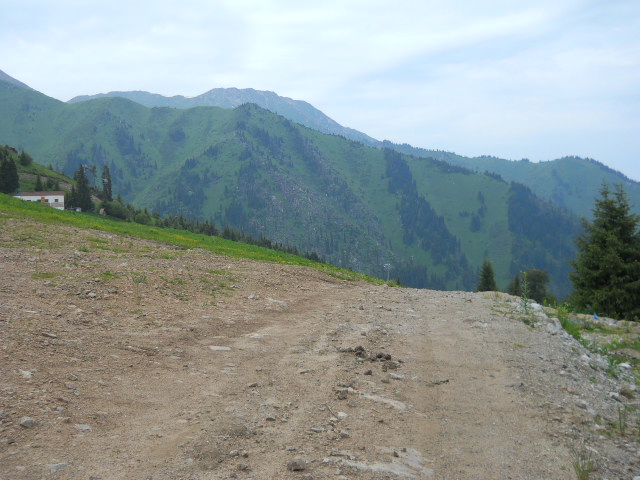 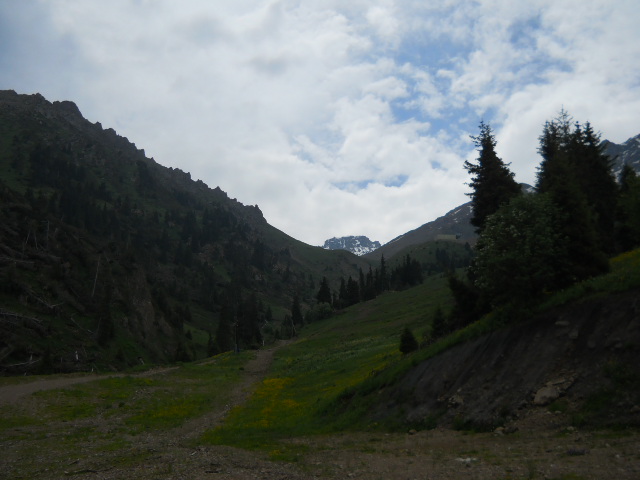 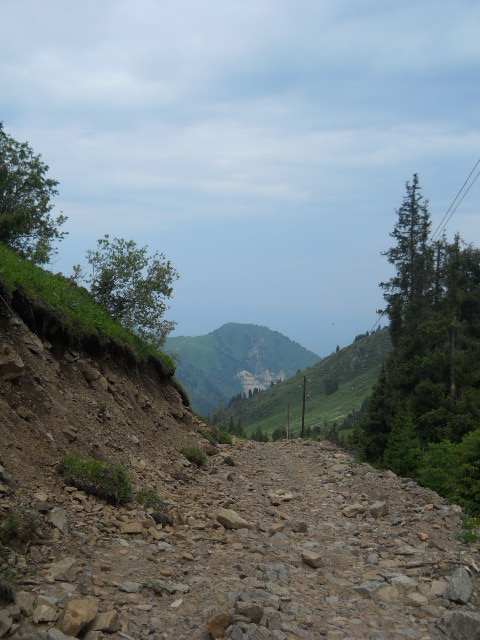 I eventually made it to the top, well after the other. It was cold up there. I had worn short, which was good for the physical effort required to reach the top, but once there I couldn’t help but wish I had brought pants. Unfortunately, the weather was closing in, so we didn’t get see much of the magnificent view. We could see snow on an adjacent peak and we had seen others climbing down the mountain with skis and snowboards. 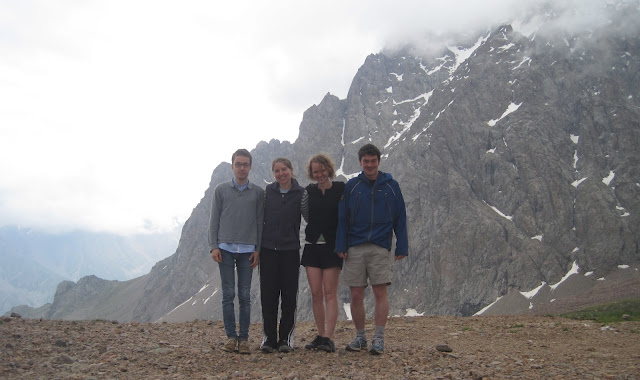 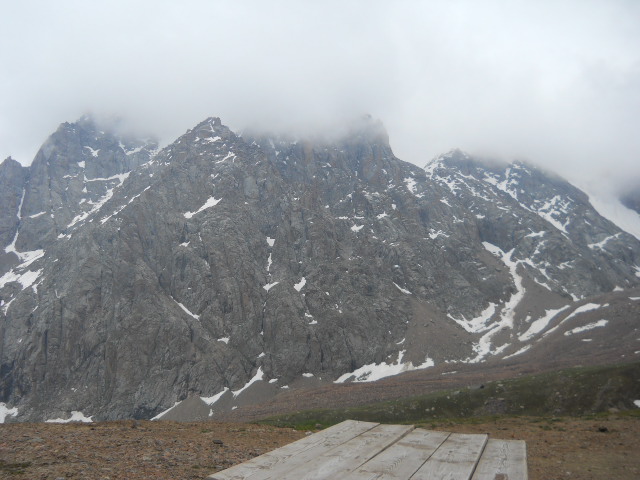 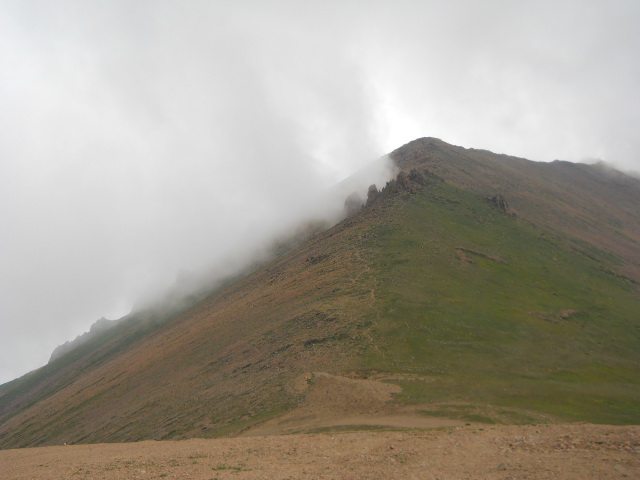 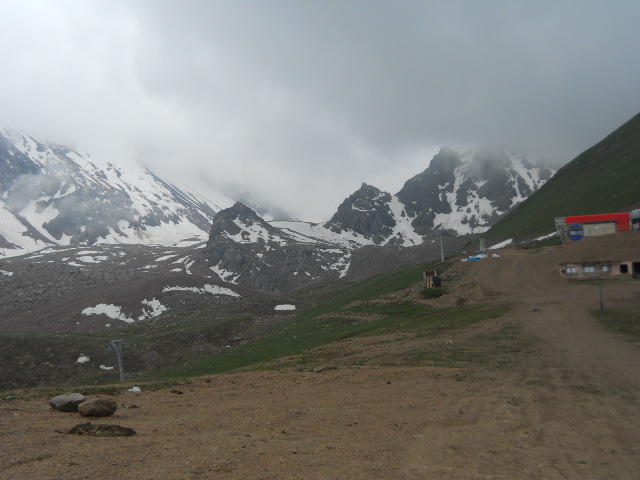 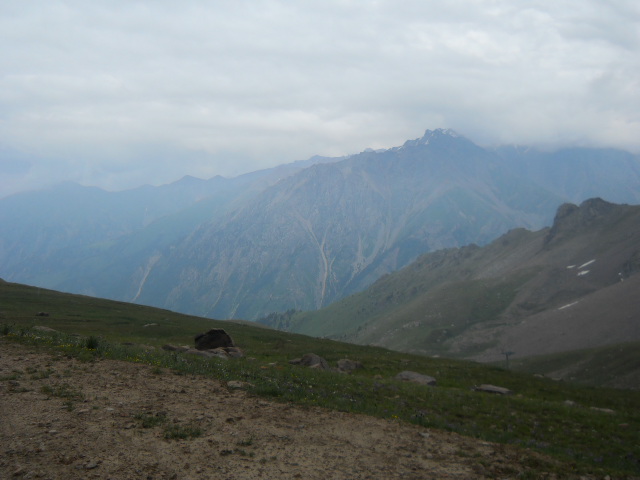 We ate lunch, quickly, and then walked along the ridge a little ways. I had seen a patch of snow not far from where we were eating and I really wanted a picture with it. This Florida girl has now seen snow eight times. An adolescent Saint Bernard greeted us by the snow patch and played in the snow. When her owner, who was up in the building by the unused ski lift, noticed that she had disappeared he came out calling her, “Shimba, Shimba come here.” Shimba was quite reluctant to leave us, possibly because I had given her a biscuit a few minutes before, but eventually she returned to her waiting owner. 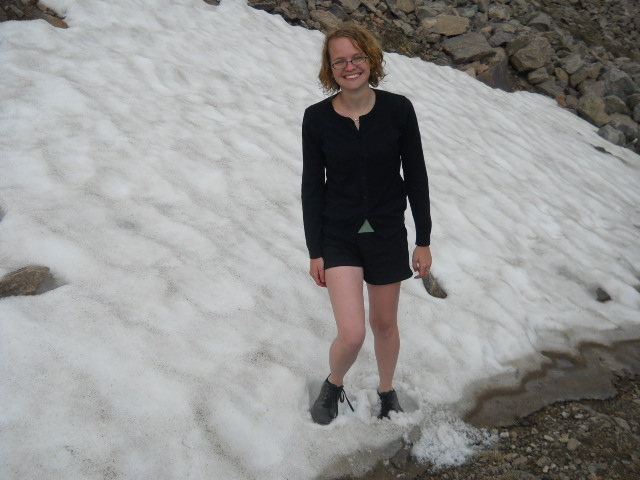 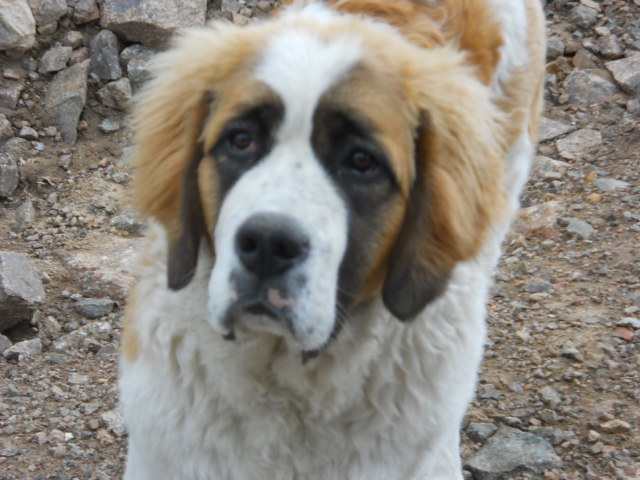 We continued down the mountain, slipping and sliding. It was much more difficult to go down than to go up. I ended up falling more times than I can count, though I only scrapped myself badly once. At one point Ed said that it was better just to run down, I tried this theory and found that this was in fact false. Antoine had to catch me so that I didn’t run off the edge or slip and fall trying to stop. Didn’t do that again. As we were navigating a rather precarious wet hill, a well-dressed Kazakh man, in a white suit jacket and dress shoes, on a phone ran passed us and somehow managed to navigated the hill without falling and dirtying that pristine white coat. We finally made it down the mountain. Finally! After using the facilities, we rode the gondola back down and took the bus back into Almaty. 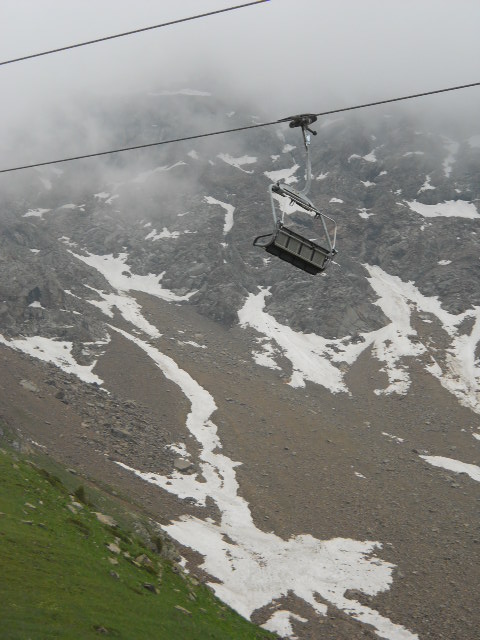 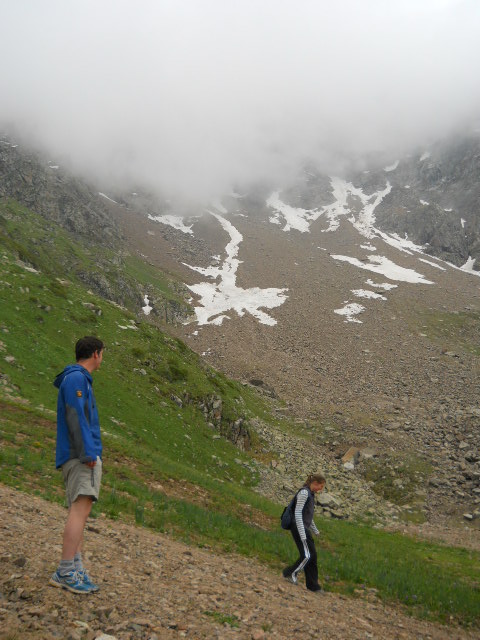 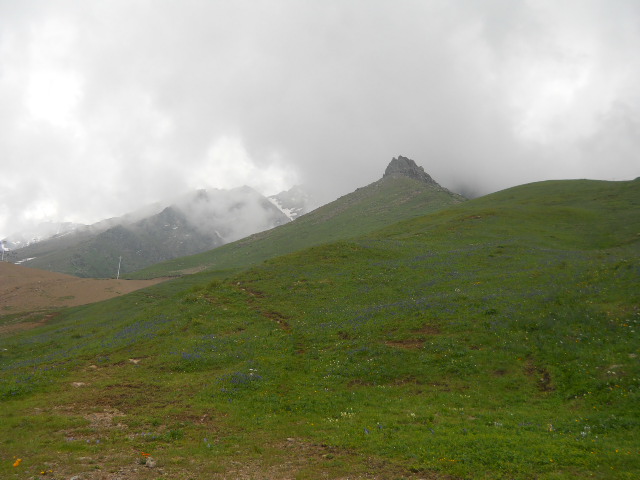 My prize at the end of this was Shashlik, a chicken kabab, which I ate one full stick and packed the other one away for tomorrow’s lunch. Now I am home and about to head to bed. I won’t need any rocking tonight.