6/2/2012
I arrived in Almaty early this morning and went through immigration without any hassles. After grabbing my bag and clearing customs, I was met at the airport by my driver Oleg, who apparently could tell that I was the American that he was waiting for. He drove me into the city and to Anel’s apartment. I am staying with Anel until I have found appropriate housing. After eating breakfast with her and her mother, I took a shower and fell asleep for eight hours. I only woke up about 4 P.M. when Anel was moving around in the living room where I am sleeping. I forced myself to get up, even though I could have gladly slept for another few hours, because I didn’t want to have trouble sleeping tonight. We’ll see. We went out to dinner with Lauren, a Fulbright scholar who returning to the states on Tuesday. Getting to know Lauren reminds me once again just how small my field is, Lauren knew two of my classmates from CLS Ufa!

6/1/2012
The flight from JFK to Istanbul was the longest leg of my journey to Kazakhstan and I must say that it proceeded in relative comfort, which was great because it was nine hours and would have been horrendous if it wasn’t comfortable. The food was surprisingly good for airplane food and the seats were far enough apart that you didn’t feel like cattle. They even had fake flowers in the bathroom and a chef who greeted us at the door, though I’m assuming his talents were used exclusively for the first and business class. I was seated on an aisle with an empty seat between me and my aisle mate. I took up two seats for about the first hour and he took up both seats for a couple more until I thought his face was an arm rest and then he moved. We also had a baby on the flight two seats in front of me in the middle isle. He screamed and he screamed but I was too tired to care. I was also surprised by the inflight entertainment system, which allowed you to watch movies and surf the net, for a price, but you could also charge your electronic devices with USB cords and play your own movies on the screen in front of you. Overall, it was a good flight.
Now, I am sitting in the Food Court waiting for my next flight, the one that will take me to Almaty. To pass the time, I am people watching which is made all the more interesting because Istanbul is a hub for flights from all over the world. I only wish that I had time to explore the city, the view from the air doesn’t do it justice. I’m just about to go grab some Burger King because I don’t know if the next leg will feed us or not. Plus, I think Burger King accepts dollars.

5/31/2012
I am at the beginning of another summer-long adventure that will take me first to Kazakhstan and then on to Thailand with one of my best friends. So, why Kazakhstan? I have an internship in Almaty, Kazakhstan with the Eurasian Foundation of Central Asia (ef-ca) where I research civil society, an area where I have limited knowledge but am eager to explore. During those nine-weeks, I hope to use my free time to travel the region and increase my understanding of the culture. By that, I mean travelling north to Astana, the capital of Kazakhstan, as well as south into Kyrgyzstan. In addition to research and travelling, Kazakhstan will also be an opportunity for me to practice my Russian because, by all accounts, the Kazakhs speak a very ‘clean’ Russian. I am also considering taking an elementary Kazakh class if the opportunity arises. Once my internship is concluded, I will have my real summer vacation in Thailand with Lydia.
I am currently sitting in the food court at JFK airport and settling in for twelve hours. I chose to take Jetblue from my hometown in Florida to JFK because it was the cheapest option and I am a poor graduate student. Unfortunately, that means that I have an extended layover as well as a change in airlines. I can’t even check-in until 8:10 P.M. and my flight doesn’t leave until 11:55 P.M. From JFK, I will fly through Istanbul in route to Almaty, Kazakhstan. Upon arrival a driver arranged by ef-ca will meet me and take me to the home of one of the women who works at ef-ca because, as of yet, I do not have confirmed housing in Almaty due to some last minute complications. I'm not overly worried, it’ll work itself out once I get there with the help of Mariana, my contact at ef-ca. 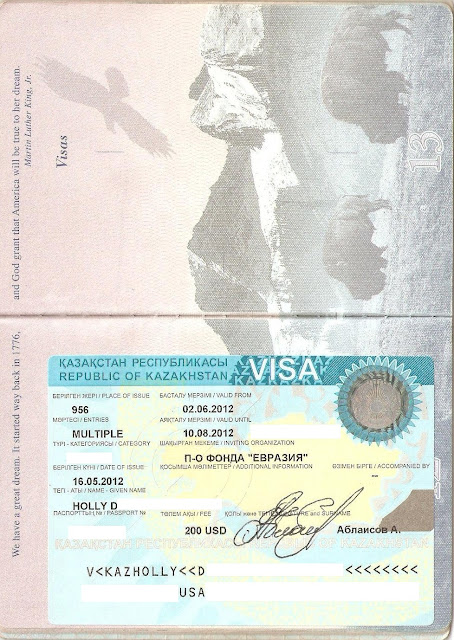 Getting the Kazakh Visa
Kazakhstan, like Russia, requires American citizens to apply for a visa. It is a relatively simple procedure, especially when it is compared to the hassle involved with procuring a Russian visa. For American citizens a letter of invitation is not required for a single entry tourist visa. However, I decided to get a multi-entry business visa, which would allow me to travel outside Kazakhstan and then return. It is vital because I have it in mind to make side trips to Kyrgyzstan and possibly Uzbekistan.
First, I had to get the visa invitation. I had been hoping to get it before I left New York so that I could go to the consulate there. However, the dates in my invitation were off by a month, so I had to ask for another one. Once I received that and my cover letter, I filled out my visa application.Having completed the application and having received the necessary documentation, I sent it off with $200 of my hard earned money and my precious passport to the Kazakh Embassy in Washington D.C. After a week of keeping my fingers crossed, my passport was returned to me with my new Kazakh visa attached inside. What a relief!