Ufa, Our Home Away From Home 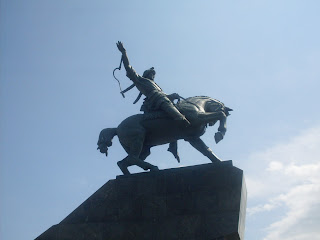 After a ten hour, overnight, flight from DC to , a seven hour layover in and a two hour flight on s7 airlines (Siberia Airlines), we finally arrived in . Even at eleven P.M. the sun was shining like it was noon. We were quickly put in to taxis and sent off to meet our host families. My Russian family is made up of Irina, her husband Valeree, their daughter Inna and Inna’s boyfriend Atem. They have quickly welcomed me into their home.

Yesterday, after a very good night of sleep, I spent several hours at our new campus along with the other CLS participants. There we were bombarded by information in Russian about classes, safety, and cell phones. Our language contract outlines that, we must speak Russian on all campuses, with our host family and on CLS sponsored excursions. We were also promised that we would be so mentally exhausted at the end of the day; sleep would not be a problem. What wasn’t mentioned was that even as I lay in my bed preparing for sleep my thoughts are a jumbled mess of Russian and English.

It is funny how much Russian I’ve lost since I left in December and how quickly it is coming back. A word will be said around me and I suddenly remember I know that word.

The last two days have been a whirlwind. We have four classes, two per day. On Monday it was video, film, and media and Russian language. Today was phonetics (read, unlearn your bad habits in the Russian language) and grammar. I find it slightly disconcerting when, I believe that grammar will be the class I worry the least about. Thank you, Nina. This program is not designed to change the Russian teaching style to fit American standards, we have to adapt to their way of teaching. It takes some getting use to. 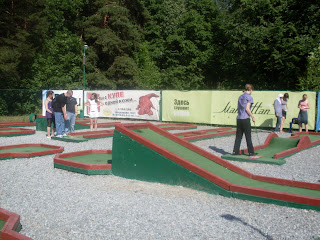 Wednesday, we were introduced to the Russian interpretation of mini-golf. Mini-golf: small greens and impossible holes. Yesterday, Friday, we went to the theater where we watched Перебор, a play where everyone is cheating on everyone. Though some of the jokes were colloquial, most could be understood, even by us. Today, Erika, Tom and I roamed the city. We discovered this tiny Orthodox Church, which is currently under restoration. Some of the old frescos were still visible, but unfortunately time and lack of care under the Soviet Government has left them in bad shape. Hopefully given time and money, the church will be restored.